David Haye has officially announced his retirement from boxing.

With a final record of 28-4, Haye has decided to hang up his gloves for good following a pair of brutal defeats to fierce rival Tony Bellew.

Haye became only the second fighter in history, after Evander Holyfield, to unify the cruiserweight titles and move up to heavyweight to claim a world championship in that weight class too. 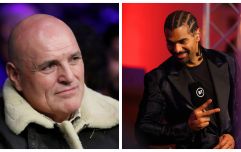 END_OF_DOCUMENT_TOKEN_TO_BE_REPLACED

The 37-year-old released a lengthy statement on his website on Tuesday morning in which he explained how his age had caught up with him in recent years, limiting the amount and quality of his performances since his four-year layoff from 2012 to 2016.

"Just as boxing gave me the chance to make my dreams a reality, I now hope my children do the same in whatever path they choose," Haye wrote.

"They know from their father’s story that anything is possible with hard work, dedication and extraordinary sacrifice."

This is not the end, it is the start of something new. Ain’t no stopping us now. Full statement 👉🏾https://t.co/paCqDm3wB8 pic.twitter.com/1tVHOezy7I

"Since October 1990, I have been a boxer. That’s nearly 10,000 days of eating and sleeping boxing, and now I’m ready to close this chapter in my life. This is not the end of my story. It’s simply the start of something new."

Haye will go down as a legend of British boxing and will continue on in the sport in a promoter's capacity.


popular
“Players flourished when Roy Keane left” - Rio Ferdinand on why Keane was a 'detriment' to Man United
The moment Israel Olatunde realised he qualified for the Euro 100m final is what it's all about
Wexford, Waterford and Kilkenny down some good men as Australia calls
Jurgen Klopp reacted like everyone else to Darwin Nunez headbutt red card
"I went up to the Italians and gave them a big auld shoulder" - Paul O'Donovan does it again
Jamie Carragher on the two Man United players Erik ten Hag can't trust
"I cannot believe how Nunez thinks he's going to get away with that!" - Jamie Carragher
You may also like
4 years ago
Tony Bellew: I'll knock Tyson Fury out! I know I can flatten him
4 years ago
Tony Bellew pays emotional tribute to brother-in-law with touching victory speech
4 years ago
Tony Bellew reveals what he said to the referee after David Haye knockdown
4 years ago
Security staff separate Tony Bellew and David Haye after heated staredown
4 years ago
Jay from The Inbetweeners gatecrashes Bellew vs. Haye press conference
4 years ago
'Firstly I'd like to thank Will from The Inbetweeners' - Tony Bellew rips David Haye's lawyer
Next Page