One wouldn't imagine that Anthony Joshua needs to take too much motivation from others.

Joshua's meteoric rise to the pinnacle of boxing's heavyweight division has been nothing short of extraordinary but he continues to take inspiration from his fellow sporting greats.

Ahead of his upcoming title defence against Alexander Povetkin, Joshua has revealed that he has been closely following the career of Cristiano Ronaldo.

'AJ' wants to follow in Ronaldo's footsteps in terms of his career longevity and has been making changes to his training regimen in recent years.

"Cristiano Ronaldo did a body test. He is 33, but has the body of a 21-year-old. You have to preserve your body," Joshua told The Telegraph.

"I could go in there and knock out Povetkin in a round or two, but then there is the eight weeks of ­intense sparring, doing 200 rounds, you have to protect your body.

"It's a bit weird because boxing is old school. But I am learning to ­adjust my life." 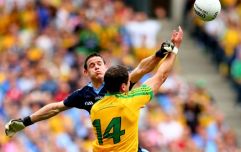 VOTE: The SportsJOE Academy Awards have been announced and you can pick the winners

END_OF_DOCUMENT_TOKEN_TO_BE_REPLACED

Joshua is not just learning from Ronaldo, however, as the undefeated Brit has admitted that he's found inspiration from the likes of Manny Pacquiao, Vasyl Lomachenko and Floyd Mayweather.

Promoter Eddie Hearn has also discussed how Joshua is "obsessed with improvements" and is determined to do everything in his power to make his career last as long as possible.

"When he went to Under Armour for a body analysis, it blew his mind," Hearn said.

"For a British fighter, Anthony is by far the most advanced in terms of training facilities or what he does. These scientists looked at his sleep and ­rehab.

"Joshua's drive now is purely the challenge to improve himself, and there are more people working with him in new areas. Early-­morning runs have gone. Joshua sleeps until he wakes."