Carl Frampton's been stripped of his WBA super bantamweight belt

The 35-year-old Cuban, who Irish fans will remember as the man who flattened "Big Bang" Willie Casey in the Citywest Hotel in 2011, predicted that the Northern Irishman wouldn't agree to face him after beating Scott Quigg.

The 16-0 pugilist was the mandatory challenger for the WBA super bantamweight title, and after it was announced that Frampton would not be fighting him in his next bout, the World Boxing Association have revoked his belt.

Fact. #Frampton is scared like Quigg and Santa Cruz before him. I don't blame him but you all should. pic.twitter.com/shDYKqZnEg 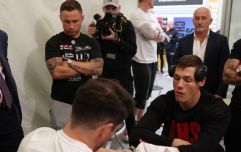 END_OF_DOCUMENT_TOKEN_TO_BE_REPLACED

“In light of Frampton’s announced intention to face an opponent other than his mandatory, and for failing to respond to WBA inquiries as to his intent, Frampton’s recognition as Champion is removed.” said WBA Championships Chairman Gilberto Jesus Mendoza in a statement released last night.

Update: Frampton gave his sarcastic take on the WBA's decision, and Rigondeaux' tweet, on Saturday afternoon:

I will be ducking Rigo at the @CrusadersFC game today 😪


popular
Roy Keane cracks up Carragher and Hasselbaink with league title joke
'Go and get a job' - Ronnie O'Sullivan responds to Shaun Murphy's amateur player comments
Brian McGrath's powerful interview after county final win is club GAA at its finest
Marcus Rashford on Solskjaer chat with squad after Man United dismissal
"I've had stick my whole career" - Mike McCarthy on 'Plastic Paddy' jibes and singing the anthem
"People tend to forget I've managed before and I've done okay in the Premier League" - Keane on the defensive
Harry Redknapp describes Man United decision to appoint Ralf Rangnick as 'ridiculous'
You may also like
7 months ago
How Carl Frampton Inspired a City
2 years ago
Carl Frampton breaks his hand in freak hotel accident
2 years ago
Carl Frampton on how much a boxer's fight purse is actually worth
2 years ago
Carl Frampton on the night he opened a tab in a New York bar and immediately regretted it
2 years ago
'Katie's an Olympic gold medallist who unified the belts but is not getting paid like a man'
2 years ago
"Boxing, particularly in Belfast, it saved so many people from joining paramilitary groups" - Carl Frampton
Next Page