Retirement remains a very realistic option for Carl Frampton in the wake of his defeat to Josh Warrington.

A betting favourite going into the IBF featherweight title fight, Frampton came up short when he faced off with the defending champion in Manchester last week.

It was only the second defeat of Frampton's career but the Belfast fighter is now considering hanging up his gloves at the age of 31.

It was a tough watch for Carl's wife https://t.co/BmOmw1gjK6

Now that the dust has settled on the Manchester Arena clash, Frampton has revealed the fights that would persuade him to return to the ring although he's admitted that we may have seen the last of him as a fighter.

"I would be very tempted to fight again if I was offered a rematch with Warrington or a third fight with Leo Santa Cruz, I wouldn't go back to lesser fights," Frampton wrote in his Sunday Life column.

"But, now it's time for a holiday and a chance to hopefully let all the frustration ease away before seeing what the future holds.

"I'm aware that everyone wants to know whether or not I will fight on after losing to IBF World champion Josh Warrington and the truth is I don't know myself. 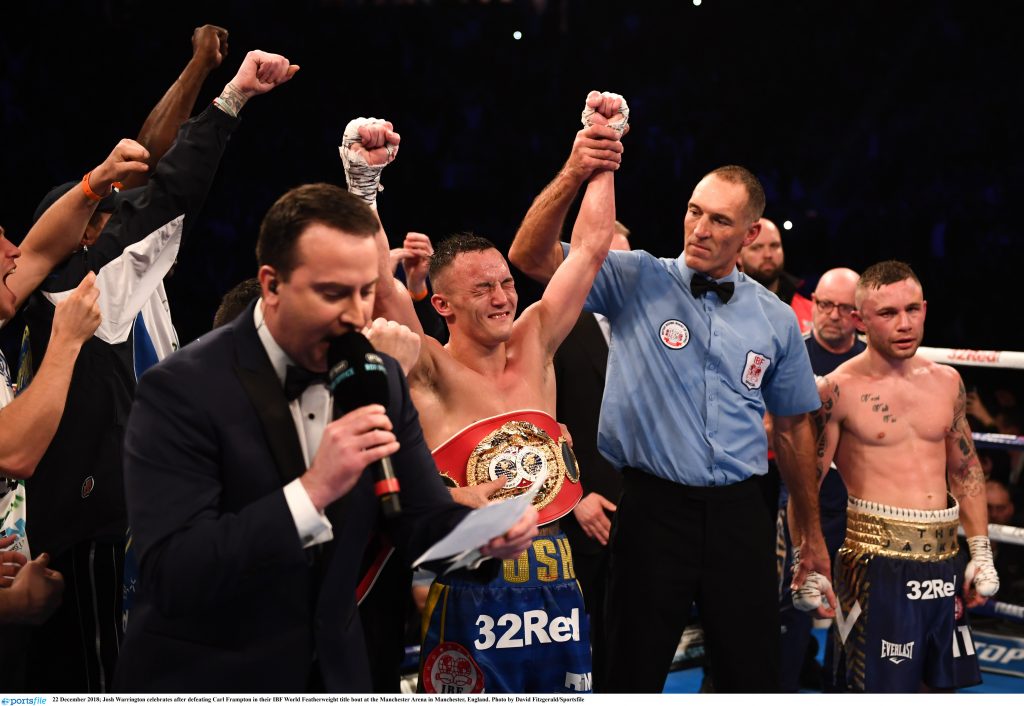 END_OF_DOCUMENT_TOKEN_TO_BE_REPLACED

"I am caught in two minds. My wife Christine has naturally been very emotional after the fight because it was very hard for her to watch and she hopes that is us done with boxing but I know she will support me in whatever I decide to do. It's going to take me some time to come to a decision about my future and I feel it is only right that I am given the space to weigh everything up.

"When I look back to the fight in the Manchester Arena I obviously have regrets and feel there are things I could have done differently but at the same time I give a lot of credit to Warrington and his team because tactically they got it right and on the night everything fell into place for them. But, if I had a re-match with Warrington I believe I would beat him - if I stuck to my game-plan.

"For me this is the hardest loss that I have ever had to deal with. Losing to Leo Santa Cruz two years ago was tough but this is so much harder to take."