George Groves says he'd love to have a crack at Conor McGregor inside the Octagon.

The former European, British and Commonwealth super-middleweight boxing champion revealed at the launch of EA Sports UFC 2 that a potential career in MMA would be of interest to him, the Express reports.

One match-up that he would be particularly fancy would be a red panty night PPV against featherweight champion Conor McGregor. Groves believes that if the fight stayed standing it could be very intriguing.

"If McGregor is going to float around my weight and wants to do a pay-per-view fight and he wants to swear at me and call me names then I'd love to have a crack (at him)."

"I think it'd make for a very interesting fight. And as I say, with him being predominantly a striker that's a huge thing as well." 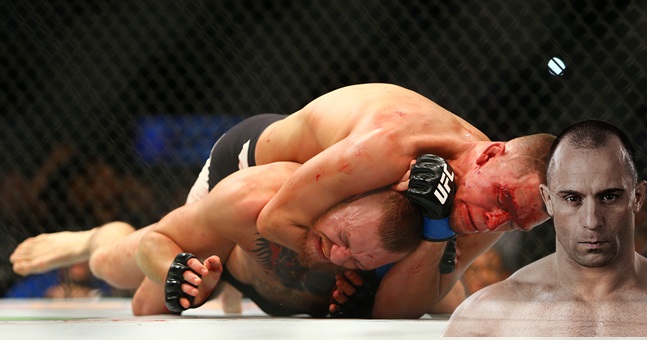 Groves didn't hesitate to twist the knife on the Notorious over his recent defeat to Nate Diaz at UFC 196.

"So he ain't gonna try and take me down. Unless he's tired and he wants to tap out."

McGregor was rocked by a body shot during the fight which he admitted after the fight took the wind out of his sails. The fight ended with a weary McGregor shooting in for a takedown which was easily stuffed by Diaz who went on to sink in a rear-naked choke to force the tap and hand McGregor his first UFC loss.

Groves did admit he liked McGregor because "he's ballsy and nuts and he doesn't care." However, he believes that it was McGregor's lack of conditioning that lost him the Diaz fight.

"It'd be hard to be him I'm sure. But I think probably losing will be the best thing for him now because then he'll know he can't get away with the stuff he's probably got away with before."


popular
"I remember someone saying, 'This guy's the best of the lot of them. Just wait for him'" - Brian O'Driscoll
"I trained with a guy that was born in 2004 the other day. We reckoned Earlsie could be his father!" - Peter O'Mahony
Nigel Owens on most annoying players to referee (three of them are Irish)
Six All Blacks but no Ireland players in world's top 20 list headed by Antoine Dupont
The story of the GAA's greatest ever minor
Longford GAA movie explores the tale so many young footballers can relate to
"I asked one question and lads slagged the arse off me!" - Johnny Sexton on Roy Keane chat
You may also like
2 weeks ago
Conor McGregor pays tribute to Solskjaer after Man United dismissal
1 month ago
Conor McGregor posts emotional 5-minute voice message to Ian Garry after UFC debut win
1 month ago
"The Irish are back, baby!" - Ian Garry pays tribute to McGregor after UFC victory
1 month ago
José Mourinho swaps Conor McGregor a Roma jersey for some whiskey
2 months ago
Conor McGregor nearly hits Chicago Cubs fan with wild first pitch at Wrigley Field
4 months ago
What are the dark circles on swimmers backs at Tokyo Olympics?
Next Page