Off the mark at last

Ireland's boxers were always going to be our leading hopes for medals at the European Games in Baku and they are already delivering.

The 19-year-old showed composure beyond his years as he picked off his more experienced opponent at will over the final two rounds, often leaving Alizada off balance and swinging wildly at thin air.

Miracles never cease: Ireland's Brendan Irvine wins a split decision over an Azerbaijani to advance to the semi-finals. Well done him. 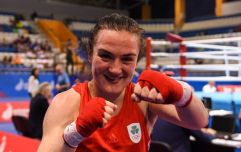 END_OF_DOCUMENT_TOKEN_TO_BE_REPLACED

The Belfast boxer is now guaranteed at least a bronze medal and faces Ukraine's Dmytro Zamotayev on Wednesday afternoon for a place in the final.

But there was disappointment for flyweight Céire Smith, who was on the wrong end of a split decision against Russian Saiana Sagataeva in her quarter-final.