Sunday was nothing short of a visual and audio sermon of football to the Gridiron faithful.

It was a day of celebration, where any NFL doubters peeping in would surely have become converted after a host of epic encounters. It was also a day when Patrick Mahomes and Tom Brady sent us more reminders of their class.

The opening weekend of the NFL season saw 45-year-old Tom Brady back slinging, the Steelers win a nerve-jangler to prove there is life after 'Big Ben' and Pat Mahomes go TD crazy. We got the run-down from David McDonnell of Smashmouting Football.

END_OF_DOCUMENT_TOKEN_TO_BE_REPLACED

After the penance of a long off-season, the football Gods were back with a BANG to light up the first NFL Sunday of the 2022 season as they delivered a variety of barely believable narratives along with some truly miraculous finishes.

They say that ‘pressure is for tyres.’

There may be a few NFL head coaches who will wake up with the intention of kicking the tyres on whether they should keep their place-kickers or find new ones after a number of games were decided by late shots at the posts.

Let’s start with the best game of the weekend, where there was a match-up between two franchises with Superbowl ambitions this season. 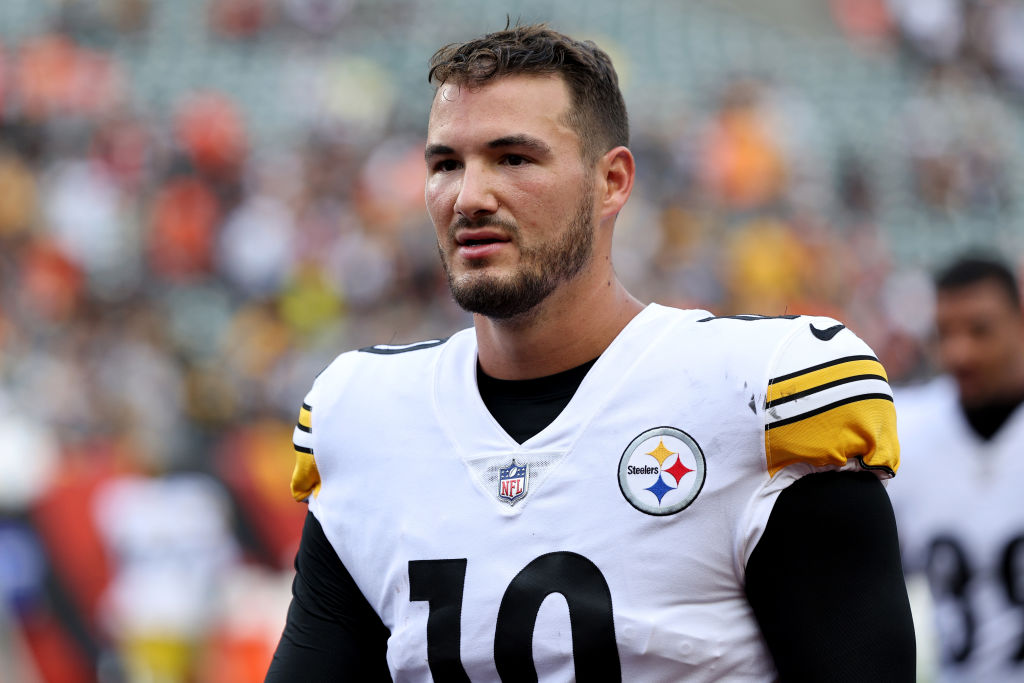 Mitch Trubisky #10 of the Pittsburgh Steelers looks on during the game against the Cincinnati Bengals at Paul Brown Stadium. (Photo by Michael Hickey/Getty Images)
Advertisement

END_OF_DOCUMENT_TOKEN_TO_BE_REPLACED

The first touchdown of the evening came when Steelers’ safety Minkah Fitzpatrick intercepted from prodigious Cincinnati quarterback Joe Burrow in the first quarter to take an early 7-0 lead. The Steelers’ much-vaunted defence lived up to their billing on a day when they had five turnovers along with seven sacks as the new Bengals offensive line struggled to settle to their task of protecting Burrow, last season’s most sacked QB.

A third quarter pass from Mitch Trubisky to Najee Harris saw the Steelers take a commanding 20-14 lead when Burrow started to shake off his constraints.

With the ball at the 20, Burrow found Ja’Marr Chase, last season’s Offensive Rookie of the Year, who caught the ball at the endline before being pushed into touch. The Bengals rushed up to the line of scrimmage to run the next play. However, had they taken their time, it is likely they would have realised that Chase had broken the plane of the endzone for a touchdown. Since they ran the next play without challenging the call, the touchdown did not stand.

Afterwards the NFL confirmed that the TD would have stood if the call had been challenged.The Bengals then had four attempts to get over the line, but the Steelers held them out with an impressive goal-line stand.

Burrow managed to get the Bengals back down to the Redzone with only 22 seconds on the clock. He threw again to Chase and the receiver grabbed an audacious ball out of the air but his toe brushed the sideline so once again it did not count. Two plays later with the time almost expired, Burrow found Chase for his second touchdown of the game to level the encounter. 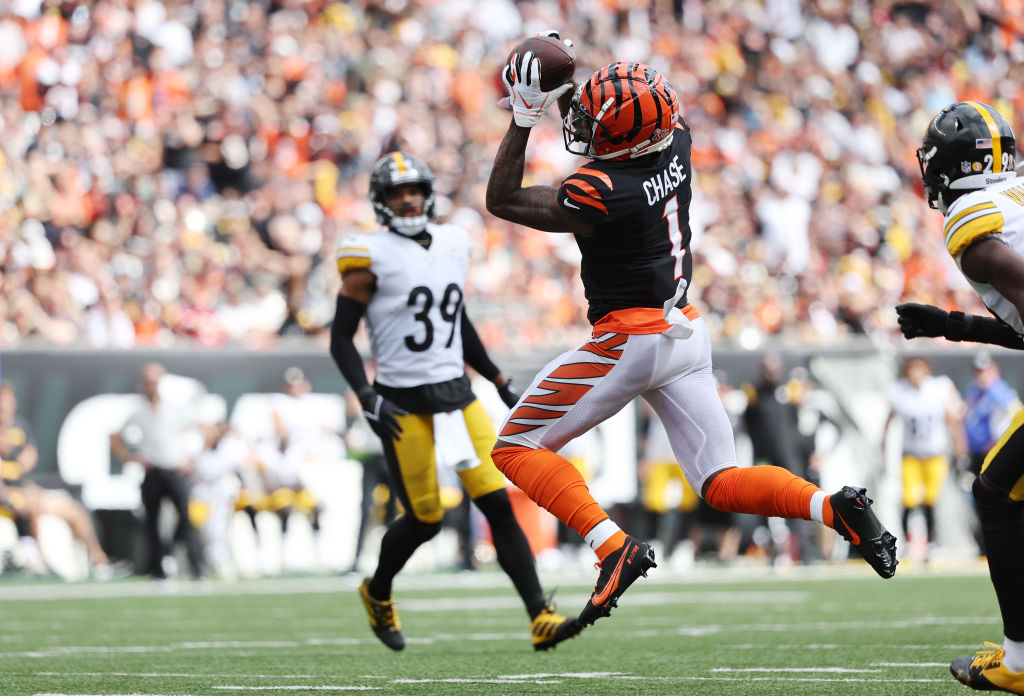 It meant that the Bengals would win the game once their kicker Evan McPherson converted the point-after-touchdown (PAT).

McPherson, the only kicker selected in the 2021 NFL draft had a monstrous season last year setting the NFL record for most field goals made by a rookie, as well as tying the all-time record for most field goals made in a single postseason. During the Superbowl last year, he did earn public criticism from his coaches when he was spotted enjoying Doctor Dre, Eminem and Snoop Dogg performing their half-time show from the stands when all his teammates were in the locker room.

Maybe fate felt the need to kick him in the butt this time around as his PAT attempt was blocked by Fitzpatrick to send the game to overtime.

With the game there for the winning in overtime, McPhearson missed a chip-shot field goal attempt to win the game again. In truth, both misses were a result of poor snaps by the Bengals special teams, who were missing their 12-season veteran Clark Harris through injury.

Fittingly, with time running out, Steelers kicker Chris Boswell, having missed an earlier kick in overtime himself when an effort hit the post, managed to direct the ball between the uprights for a famous win for the Black and Gold.

This victory however looks to have come at a steep price as last season’s Defensive Player of the Year, TJ Watt, left the field late with an injury. It was reported via Twitter by Mike Giaradi that it could be a season-ending pectoral muscle injury. An MRI will confirm the diagnosis later today with Steeler Nation hoping that it may be a partial tear in the hope of seeing Watt return later in the season. 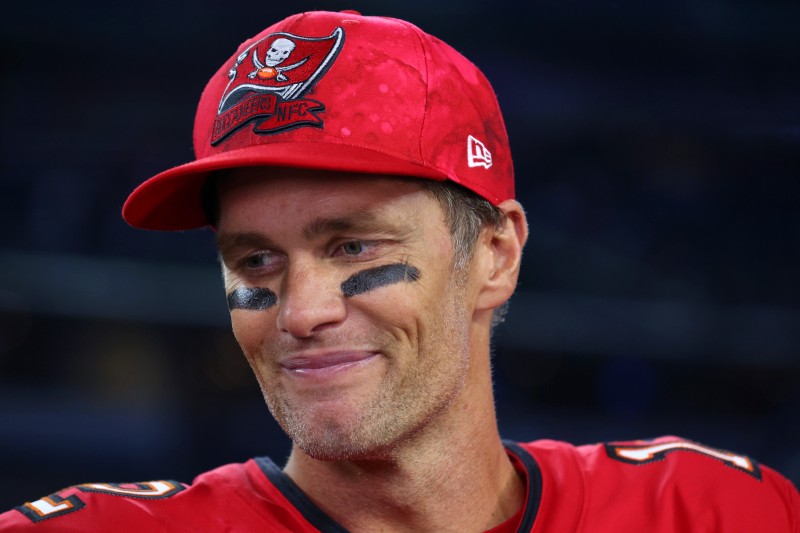 Tom Brady #12 of the Tampa Bay Buccaneers is interviewed after the Buccaneers defeat the Dallas Cowboys 19-3 at AT&T Stadium on September 11, 2022 in Arlington, Texas. (Photo by Richard Rodriguez/Getty Images)

Pat Mahomes flexes and Tom Brady at it again

The Chicago Bears recorded a surprise victory over the San Francisco 49ers when Justin Fields led a comeback in a wet Soldier Field. The tide turned when Fields found Dante Pettis with an off-script play in the third quarter. Another touchdown to Equanimeous St Brown on a play-action movie saw the Bears take the lead, in a game where 49er’s QB Trey Lance struggled throughout.

There was a third winning franchise from the NFC East when the Philadelphia Eagles overcame the Lions 38-35 in a score fest in Detroit. Other notable performances saw the Kansas City Chiefs, led by former League MVP Patrick Mahomes, score six touchdowns to brush away any doubts about their credentials since the loss of Tyreek Hill to the Dolphins in the off-season.

Miami gave a lot of punishment to Patriots QB Mac Jones, while they stormed to a 7-20 victory. Another former league MVP, Lamar Jackson, showed off what he can do with his arm by throwing three deep touchdown passes to beat the Jets 24-9.

One of the day’s top individual performers was Minnesota wide receiver Justin Jefferson, who clocked up 158 receiving yards and two touchdowns in the first half as the Vikings eased to victory over the Green Bay Packers.

In the late match, Tom Brady did enough to beat a disappointing Dallas. The Cowboys defence was well-marshaled by Micah Parsons but their offence could not ignite throughout the contest. The only touchdown came when Brady found Mike Evans in the endzone in the fourth quarter. During the last few minutes of the game, franchise QB Dak Prescott left the field with a hand injury with owner Jerry Jones confirming that he will miss multiple weeks.

The promoted back-up is Cooper Rush, in his second stint at Dallas, since he went undrafted in 2017. He has since made 10 appearances for the Cowboys throwing only four touchdowns in his career to date.  If the Cowboys are serious about getting their season back on track, surely they must be  considering an early season trade for 49ers back-up Jimmy Garropolo, who coincidentally knocked the Cowboys out of the playoffs last January. 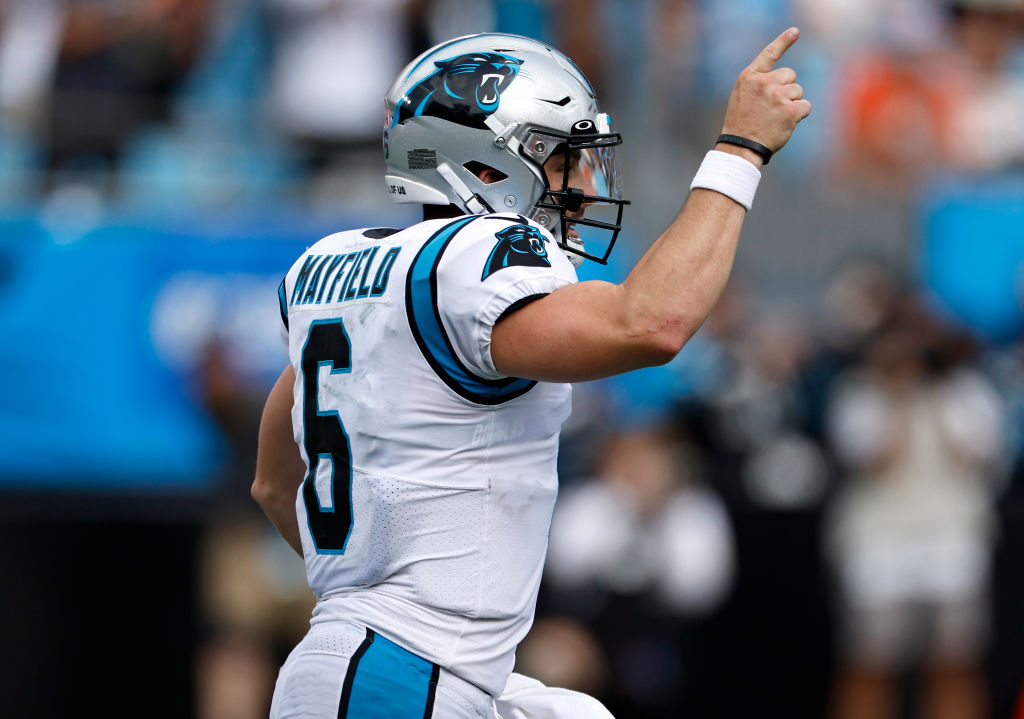 Quarterback Baker Mayfield #6 of the Carolina Panthers reacts following a completion during the fourth quarter against the Cleveland Browns. (Photo by Jared C. Tilton/Getty Images)

There was more kicking woe in another of the weekend’s hotly anticipated match-ups when quarterback Baker Mayfield, newly of the Carolina Panthers faced his former Cleveland Browns teammates.

And once again, it wasn’t short of drama.

Trailing in the fourth quarter after two Kareem Hunt TDs for the Browns, Mayfield launched a late comeback bid.

From his own 25-yard line,  Baker found Robbie Anderson with a deep ball to make it a one-score game with six minutes remaining.  Anderson, an NFL veteran who began his career with the New York Jets, interestingly changed his first name from Robby to Robbie over the summer telling ESPN’s Adam Schefter; “it’s better on paper with the ‘ie’ on the end.”

With just over a minute to go, Carolina kicker Eddy Pineiro put them into a 23-24 lead and victory looked within reach. However, Baker’s revenge was taken away from him when rookie kicker Cade York won the game for the visitors when his 58-yard effort sailed inside the posts as time expired.

There were heroic but barely fathomable come-from-behind victories for two of the new head coaches in the NFC.

*For more on Falcons vs. Saints, Giants vs. Titans, Texans vs. Colts, Jaguars vs. Commanders, and a Monday Night Football preview, check out Smashmouting Football.