We'll start off with just three words for you all...

With another week almost in the bag, we got a Sunday day filled with some cracking matches and late drama, as the cream of the NFL continues to rise to the top.

END_OF_DOCUMENT_TOKEN_TO_BE_REPLACED

One of the most compelling games, this week, was the late prime-time kick-off between the Chiefs and their division rival LA Chargers, as two of the best two quarterbacks in the game Patrick Mahomes and Justin Herbert duelled it out for four entertaining quarters.

To get you up to speed on that game, and all the action action, David McDonnell of Smashmouting Football runs through all the big news from Week 11 of the NFL. 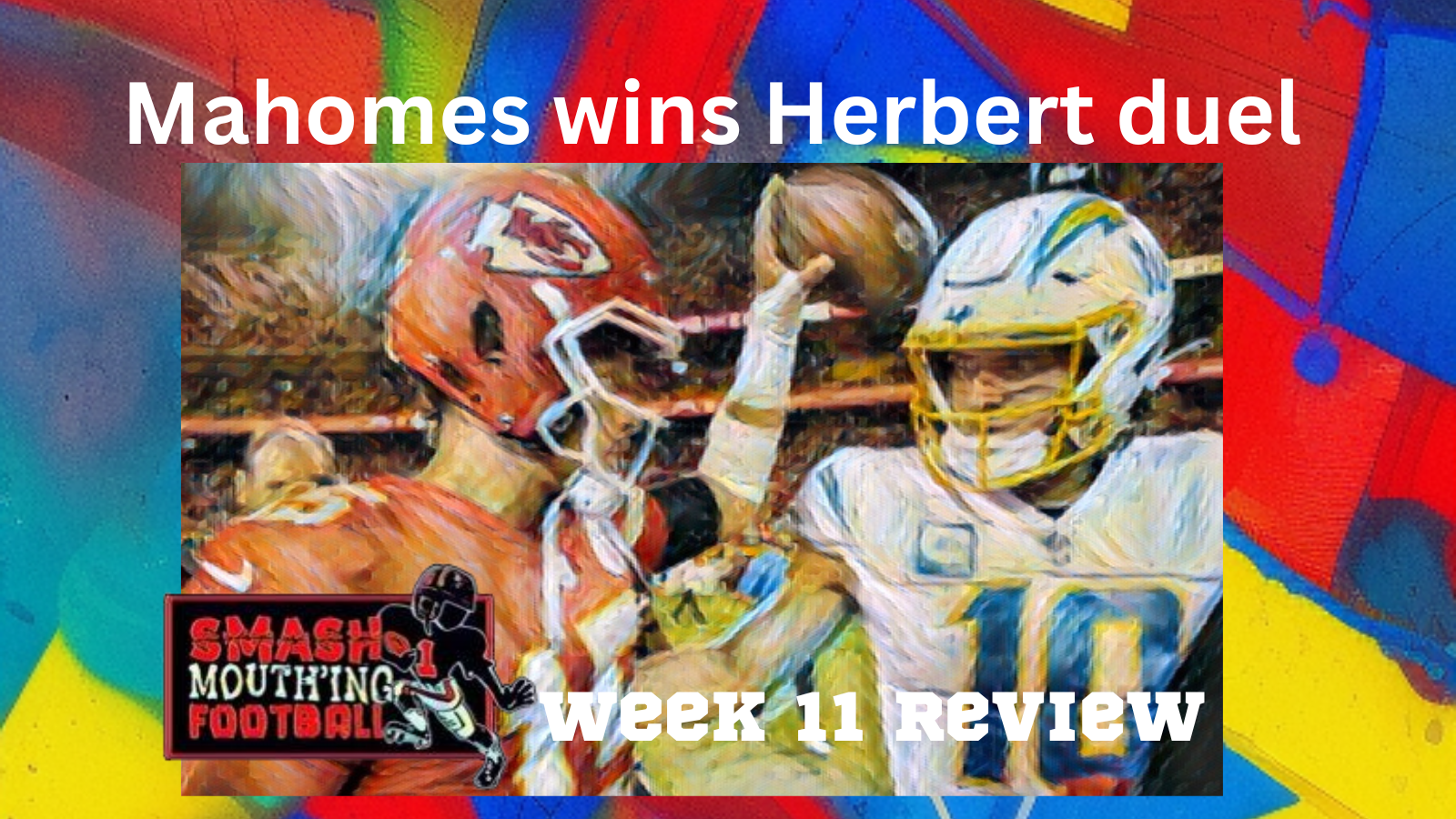 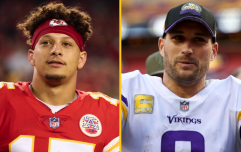 END_OF_DOCUMENT_TOKEN_TO_BE_REPLACED

Justin Herbert’s performances have also been trending upwards as he has been getting healthier recently and he got not one, but two major boosts before kick-off when both his top receivers Mike Williams and Keenan Allen returned to the starting line-up. This certainly helped the former Oregon Duck QB produce his best performance of the season.

He was sizzling throughout and on his first drive, he gave Allen his first catch of the season before throwing a 50-yard bomb to Joshua Palmer, who has started to make a name for himself in the interim.

Herbert starts the game on 🔥 with a touchdown pass to Joshua Palmer on his first drive #Boltup pic.twitter.com/31y9AcVdrP 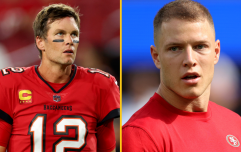 END_OF_DOCUMENT_TOKEN_TO_BE_REPLACED

Kansas City started the contest by scoring on each drive but the Chargers defence kept getting them off the field on key third downs. The visitors had to wait until the start of the second quarter when Mahomes found his favourite target on Travis Kelce, who high-stepped into the endzone.

A pattern was beginning to emerge with the team in possession retaking the lead and that would continue throughout. Austin Ekeler finished off a second quarter drive before Cameron Dicker kicked the home Chargers into a 13-20 half-time lead.

The teams continued to battle it out in the trenches and it took until the first play of the fourth quarter when Mahomes found Kelce on the 10th play of another long drive and the tight-end ran in along the right side his second six-pointer to put his side in front once more.

It's Kelce again as the #Chiefs go back in front at the start of 4Q #mahomes pic.twitter.com/gm56VEl97H

With the game in the balance coming down the stretch, there were two turnovers. First Allen fumbled but three minutes later his teammates bailed him out by retaking possession.

I have been saying for a number of weeks that Herbert should use his legs to pick up first downs and he was excellent at running in college and he must have been reading my column because he started to do just this on his last drive.  He then found Keenan Allen along the right sideline, and the returning wideout did incredibly well to haul in the ball to bring the play to the 16-yard line.

Keenan Allen makes up for his fumble with this brilliant catch!!! #BoltUp pic.twitter.com/FBAU32dE2S

Herbert then found Palmer with a dart into the endzone as the Chargers took a late lead with 1.46 remaining.

The challenge was laid down and taken up by Patrick Mahomes and the best quarterback in football didn’t disappoint. He was electric on that final drive, picking up first downs with his arms and legs before finding Kelce, who took it into the endzone for the winning touchdown, his third of the night.

Kelce with his hat-trick of touchdowns wins the game for the #Chiefs pic.twitter.com/bnEh1CDgBW

It was a terrific contest and interestingly that victory made it 25 consecutive wins in November and December for Patrick Mahomes and the Kansas City Chiefs. For me, with their future Hall of Fame talents in Patrick Mahomes and Travis Kelce is rich form, they are my Superbowl favourites.

In our Smashmouthing Football preview column, on Saturday, I tipped Dallas (which I rarely do!) because of how unconvinced I still am by the then 8-1 Vikings, despite all the acclaim that came their way last week for having the joint-best record in football.

I understood the adulation that came their way after their superb win against Buffalo in Week 10 and it was way over the top and i felt the team would find it difficult to get their feet back on the ground after such an incredible high. Seven days later, Minnasota got demolished 40-3 at home by the Cowboys and the Super Bowl contending Vikings of last week looked just as untrustworthy as the Vikings of every other year.

Dallas were very impressive and their D-line didn’t give Kirk Cousins room to breathe. By the third quarter they had seven sacks and Kevin O’Connell took his QB out of the firing line and put in Nick Mullins, as the game was over as a contest. The Vikes need to reset quickly for a Thanksgiving home game on Thursday versus the New England Patriots. On the night, all the Cowboy stars came out to play, with Tony Pollard shining brightest with 189 yards from scrimmage and two touchdowns, with this the pick of the bunch.

He could have had four but Zeke managed to gobble up two from close range.

My second prediction was that Buffalo would bounce back after two losses on the trot, despite having to travel in snowy conditions to play a home game in Ford Field in Detroit, against an unpredictable Browns.

The Bills were trailing to an Amari Cooper touchdown in the second quarter when head coach Sean McDermott publicly having words with his star receiver Stefon Diggs, who was clearly upset for not having been targeted all game. With 14 seconds left in the first half, Josh Allen found Diggs unmarked at the back of the endzone for Buffalo’s first lead of the contest.  They would go on to win more comfortably than the  23-31 final scoreline suggests.

So, two for two so far and my third hot-take was that the New York Jets would win in Foxboro for the first time in over a decade and end their highly embarrassing 13 consecutive losses against their hated division rival the New England Patriots. My belief was that their defensive front would stop the Pats rushing attack and Zach Wilson would be the man to lead them to victory.

During the game, both defences balled out against the two sophomore QBs with the Jets. Gang Green tallying five sacks of Mac Jones, while the Patriots held Wilson to a miserly -2 yards of offence in the second half. It goes to show that missing half your offensive line and your starting running back against a Bill Belichick defence is never ideal.

However, with the scores a lowly 3-3 in the fourth quarter, Wilson had the ball with 90 seconds remaining in the contest. Could he lead his side down the field to kick a late field goal to win the contest?

It turns out he couldn’t and when the Jets punted back to the Patriots with 13 seconds left, Marcus Jones took it to the house for an 84-yard winning touchdown.

Marcus Jones stops the game going to overtime by winning the game for the #Oats with a superb punt return touchdown!!! pic.twitter.com/NFLawxtcRs

So my predictions fell short of a clean sweep and as Meat Loaf used to sing ‘Two Out Of Three Aint Bad.’

*For more on those successful predictions, the Patriots defence coming up big, the Rams struggles and the rest of Week 11, check out Smashmouting Football, and give them a follow on Twitter.


popular
Talksport presenter puts Martin O'Neill to the pin of his collar over Declan Rice and Jack Grealish
Roy Keane scores winning goal past Micah Richards in ITV v BBC pundits match
Gary Neville sticks up for Ronaldo as contextless pictures and videos taken as gospel
World Cup Power Rankings: The top 10 players at the tournament ahead of the quarter-finals
World Cup Power Rankings: The top eight pundits of the tournament so far
Rory McIlroy explains 'falling out' with Shane Lowry that lasted a few years
Ballyhale's Colin Fennelly felt Ballygunner's victory speech was disrespectful
You may also like
1 month ago
Bill Belichick makes big quarterback call as Justin Fields win it for Chicago Bears
1 month ago
Taysom Hill puts together one of the most absurd performances in NFL history
1 month ago
Fan chooses poor time to approach Roy Keane at NFL London
2 months ago
Patrick Mahomes upstages Tom Brady to end controversial NFL week on a high
2 months ago
Miami Dolphins quarterback allowed to continue despite disturbing footage after head knock
2 months ago
Kyler Murray puts Arizona on his back in weekend of incredible NFL comebacks
Next Page