NFL star Damar Hamlin is in hospital and in 'critical condition' after being tackled during the Buffalo Bills game against the Cincinnati Bengals.

The Bills safety had suffered a cardiac arrest after taking a big blow to the chest by Bengals receiver Tee Higgins, and although he initially got up onto his feet, he soon collapsed and lay motionless on the floor.

The NFL said that he was taken by ambulance to the University of Cincinnati Medical Center. Teammate Stefon Diggs later joined Hamlin at the hospital. 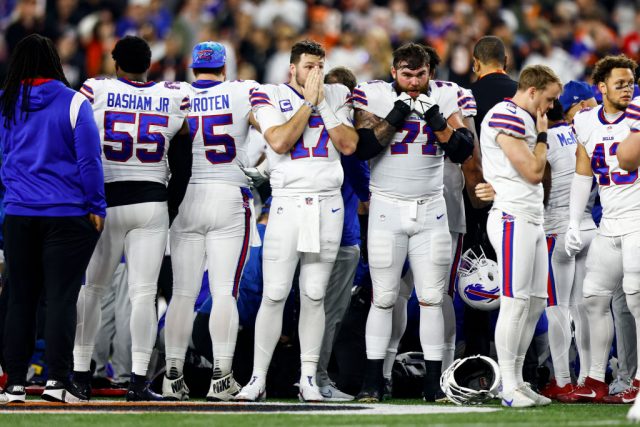 “Damar Hamlin suffered a cardiac arrest following a hit in our game versus the Bengals,” the Bills posted on their official Twitter account.

“His heartbeat was restored on the field and he was transferred to the UC Medical Center for further testing and treatment. He is currently sedated and listed in critical condition.”

The NFL announced more than an hour after the injury that the game would not resume.

“Our thoughts are with Damar and the Buffalo Bills. We will provide more information as it becomes available,” the league said in a statement.

“The NFL has been in constant communication with the NFL Players Association which is in agreement with postponing the game.”

An ambulance was on the field four minutes after Hamlin collapsed, and his teammates formed a circle around him and prayed, with many of them in tears.

A Bills fan kneels down outside the hospital as he waits to hear on Damar Hamlin’s condition. @WCPO pic.twitter.com/AcCCh44TG8

A group of Bills and Bengals fans gathered near the hospital where the 24-year-old is being treated and held candles.

“No one’s been through this,” Pro Football Hall of Fame quarterback Troy Aikman said on the ESPN telecast. “I’ve never seen anything like it, either.”


popular
Man United could be blocked from playing in the Champions League next season
French media's opinion of this Ireland team becomes clear as vital clash nears
Ireland team vs. France: Form players rewarded and a welcome return
Man United vs Leeds: Why the game won't be shown on Irish TV
Eight players to watch in tonight's Sigerson Cup semi-finals
Clive Woodward happy to 'eat humble pie' after bold comments about Ireland
"I should have been more mature" - O'Sullivan's injury trail a cautionary tale for Sigerson casualties
You may also like
2 months ago
Josh Allen and Buffalo Bills left stunned by 'greatest catch in NFL history'
3 months ago
NFL round-up: Patrick Mahomes the hero and Kirk Cousins living his best life
3 months ago
Tom Brady’s year goes from bad to worse as 49ers get themselves a true baller
3 months ago
Bill Belichick makes big quarterback call as Justin Fields win it for Chicago Bears
3 months ago
Taysom Hill puts together one of the most absurd performances in NFL history
3 months ago
Fan chooses poor time to approach Roy Keane at NFL London
Next Page