Four-time NBA MVP LeBron James may be set to leave the Cleveland Cavaliers for the second time in his career after he reportedly declined his $35.6 million option, and thus will become an unrestricted free agent this summer.

James, who resigned with the Cavaliers in 2014 after four years with the Miami Heat, has brought the Cavaliers to four consecutive finals where he has won one championship.

LeBron James’ agent informed the Cavs he will not exercise his $35.6 million option and thus will become an unrestricted free agent, sources told @clevelanddotcom ... Story coming

The Cavaliers were swept in this year's NBA finals by the defending champion Golden State Warriors and according to ESPN NBA insider Stephen A. Smith, James has reached out to Warriors All-Star Kevin Durant about linking up with the Los Angeles Lakers next season. 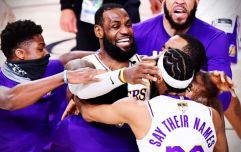 END_OF_DOCUMENT_TOKEN_TO_BE_REPLACED

Free agency officially begins on Sunday and James will attract interest from every team that can fit him under their salary cap.

80 percent of NBA teams are expected to be over the cap next season with the Houston Rockets, Philadelphia 76ers, Lakers and Cavaliers the primary frontrunners to sign the three-time NBA champion.

According to ESPN front-office insider Bobby Marks, Cleveland can offer James a more lucrative deal than any other team -- a five-year max contract in the neighborhood of $207 million. Any other suitor can offer a four-year pact worth $152 million.


popular
Roy Keane's first impression of Cristiano Ronaldo proved to be very accurate
The SportsJOE 12 o'clock quiz | Day 290
The 14 Irish players Down Under as TG4 come up with the goods once again
Lady Gaga will perform Satanic ritual during Super Bowl halftime show, according to conspiracy theorist
Fernando Torres has got absolutely jacked since retiring from football
The controversial reason Conor McGregor's win over Nate Diaz was not unanimous
QUIZ: Can you name all of these 1990s GAA stars?
You may also like
2 days ago
NBA star Kyrie Irving has bought a house for George Floyd's family
3 months ago
"I trusted him, we trusted him, and it just didn't go. You live with that" - LeBron James
4 months ago
"I'm an African American guy coming from a rough place and that person could be me"
6 months ago
QUIZ: Name all 22 teams remaining in the 2019/20 NBA season
2 years ago
Ex-NBA player dies in shoot-out with police
2 years ago
LeBron James has decided on his new club
Next Page