Roll up, Roll up!! What a show we have for you today.

Kyler Murray and Tua Tagovailoa were the architects of two scintillating NFL comebacks, this weekend.

The second weekend of the NFL season was all about the comeback kids and the come-from-behind charges that fell just short. We got the run-down from David McDonnell of Smashmouting Football.

END_OF_DOCUMENT_TOKEN_TO_BE_REPLACED

If Week 2 of the National Football League was a film genre, Sunday was a thriller.

There were cliff-hanging twists to rival the most sensational Hollywood blockbusters, with more zero to hero storylines that would make a Disney scriptwriter blush. Stories that you would barely believe could happen played out in front of our eyes.

The drama left some fans joyous with delight, while their rival opponents didn’t know whether to laugh or cry at the tragic or comic turn of events. The rest of us were left scratching our heads barely believing what we have seen. The action could perhaps be best summed up with the mind-blown emoji.

END_OF_DOCUMENT_TOKEN_TO_BE_REPLACED

Sundays like this one are what makes the NFL such a joy to watch and proves, once again, that there is no other professional sport in the world that provides such thrilling finishes consistently from week-to-week .

So ladies and gentlemen, take your seats, sit back and we will lift the curtain on how this action-packed Sunday matinee unfolded . 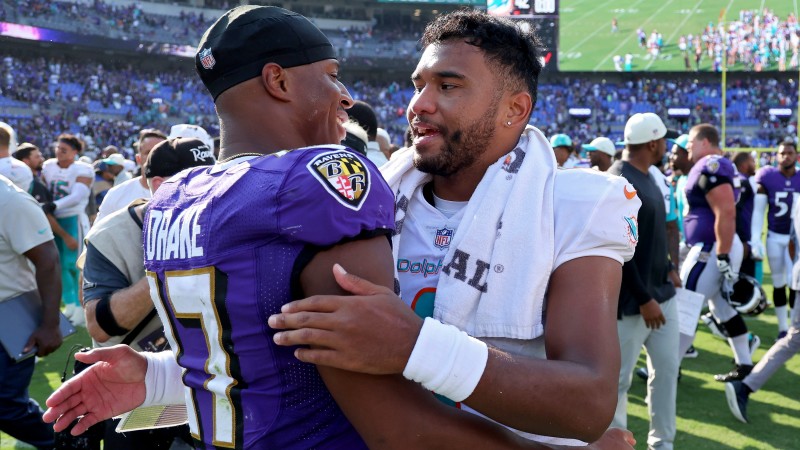 END_OF_DOCUMENT_TOKEN_TO_BE_REPLACED

There was a memorable opening scene when Ravens’ Devin Duvernay caught the opening kick-off and ran it back for a touchdown for an early indicator that we were to witness an engrossing encounter.

Miami mustered an initial response when QB Tua Tagovailoa first found wide-out Jaylen Waddle for a 62-yard reception and the former Alabama pair combined again later in the drive to tie the game.

Coming off an impressive victory Week 1 against the Jets, Baltimore’s leading man and former league-MVP,  Lamar Jackson took centre-stage in this contest.

He first threw to wide-out Rashod Bateman, who took off for a 75-yard run to the endzone,  before finding tight-end Mark Andrews and receiver Demarcus Robinson to give the Ravens a healthy 28-7 lead at halftime.

Lemar then reminded everyone why he is one of the NFL’s brightest stars when he ran for a 79-yard touchdown in the third quarter, breaking the NFL quarterback record by rushing for more than 100 yards for the 11th time in his career. The Baltimore money-men who couldn’t come to an agreement on a new contract for Jackson in the off-season must now be worrying how much it is going to cost to keep the superstar at the club.

With Miami trailing by 21 points heading into the fourth quarter,  the game looked all over bar the shouting, with Tua’s many critics getting ready to clear their throats. However, the fat lady hadn’t sung when Tua completed three passes for 72 yards and a TD to River Cracraft.

This season the Dolphins have the two fastest wide receivers in the league, after Jaylen Waddle was joined in the off-season the the man known throughout the NFL as the ‘Cheetah’: Tyreek Hill.  Two deep balls by Tagovailoa found Hill over the top for successive touchdowns to level the scores 35-35 with five minutes to play.

Under pressure, the Ravens responded when Justin Tucker kicked Baltimore into a three- point lead with two minutes left to play. On his last drive, Tua found Waddle in the endzone for a late 41-38 win for the Dolphins.

By turning over a 21-point deficit, it was a day-of-days for the over-maligned Dolphins quarterback who dismantled a respected Ravens’ defence to finish with six touchdowns passes. He also threw to his pair of speedster receivers, Hill and Waddle, for 190 and 171 receiving yards respectively. After the game, Tyreek Hill had some choice words for those who have been critical of his quarterback.

After such a wild comeback, surely lightning couldn’t strike twice? 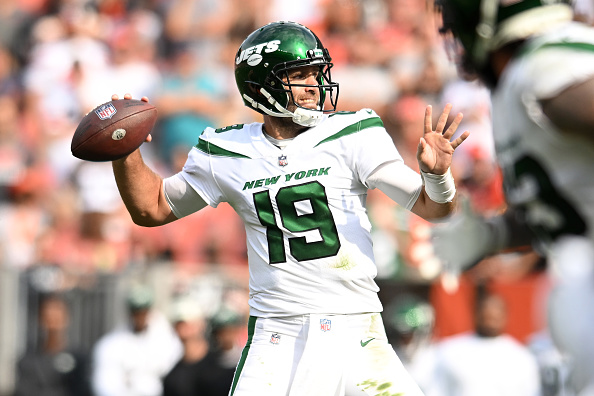 Joe Flacco #19 of the New York Jets passes the ball against the Cleveland Browns, at FirstEnergy Stadium. (Photo by Nick Cammett/Getty Images)

Deep in the fourth quarter, running-back Nick Chubb ran in for a hat-trick of rushing touchdowns to give the hometown Browns what looked like an insurmountable 30-17 lead with two minutes left to play. A minute later Joe Flacco threw what looked like a consolation touchdown when he found Corey Davies on a busted coverage to leave six points between the sides.

All the Cleveland Browns needed to do was recover the on-side kick and the game was over.

However, the Jets defied the odds by recovering the kick after Browns receiver Amari Cooper inadvertently stopped the ball from going out of play while trying to get his hands on the ball. It led to a Jets recovery. With 22 seconds left on the clock, Joe Flacco found rookie wide receiver Gareth Wilson to tie the game with his second touchdown of the contest.

Joe Flacco to rookie Garreth Wilson for special comeback win at the death against the Browns #GoJetsGo pic.twitter.com/ajlHQuQZr7

The resulting PAT from kicker Greg ‘The Leg’ Zuerlein sealed an incredible come-from-behind 31-30 victory for the ‘Gang Green.’

This was a particularly sweet-tasting victory for Jets’ Head Coach Robert Salah, who in the run-up to the game said he was “taking receipts on all the people who continually mock and say that we’re not going to do anything. I’m going to be more than happy to share them with all of you when all is said and done.” 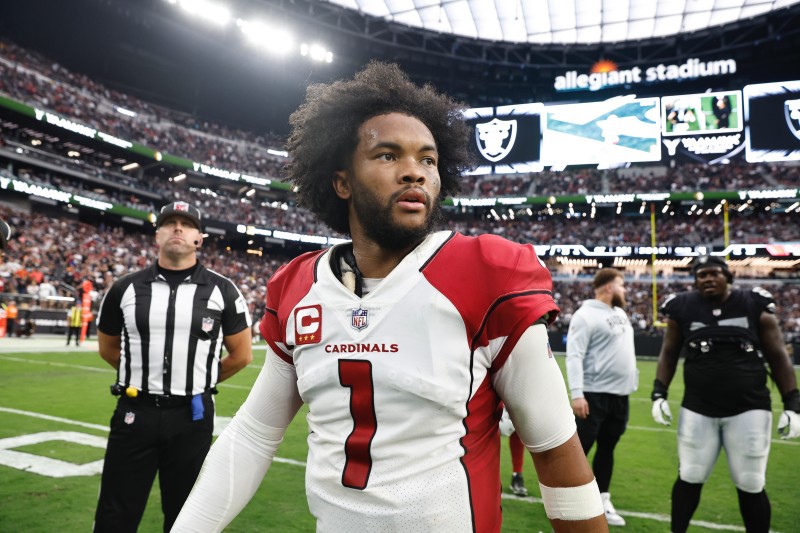 Kyler Murray #1 of the Arizona Cardinals pictured after a game against the Las Vegas Raiders at Allegiant Stadium. (Photo by Michael Owens/Getty Images)

Perhaps the most thrilling turnaround of fortunes came when the Las Vegas Raiders hosted the Arizona Cardinals.

The Raiders were on top from the start and took a commanding 20-0 lead into halftime with touchdown receptions from Derek Carr to Devante Adams and Darren Waller. At the time,  it looked like the Cardinals, who conceded six touchdowns to the Chiefs in Week 1, were likely to be on the end of another battering.

But led by their quarterback Kyler Murray, whose professionalism was publicly questioned in the off-season, they fought back.

Trailing 7-23 in the fourth quarter,  Arizona scored their second touchdown of the half when running back Darrel Williams made it into the endzone to leave 10 points between the sides. It meant that the Cardinals had to go for a two-point conversion to have any chance of staying in the contest. Then came undoubtedly the ‘Play of the Day’ when Murray weaved his magic feet to evade a number of tackles before running into the endzone.

Play of the day!!! What a score!!! Kyler works his magic for an important two-point conversion. #Kyler of the #Cardinals pic.twitter.com/AYA5OE6hEx

In total he had the ball in his hands for 21 seconds and scrambled 84.8 yards from the two-yard line to leave eight points between the sides.

On their last drive of the contest, Murray looked in trouble when on fourth down he managed to throw the ball away but a flag was thrown for holding to extend the drive. It gave Arizona  a fresh set of downs.

Once again the Raiders brought it to a fourth down with only five seconds remaining on the clock. On the last play of the game, Murray ran in for the touchdown,  nonchalantly celebrating before he crossed the line. It left the score at 21-23 with another two-point conversion needed in order to force overtime.

Inconceivably, with the ball at the two-yard line the Cardinals were penalised for a delay of game which brought the ball back out the the seven-yard line. However,  Murray wasn’t to be denied, throwing a dart down the middle into the hands of AJ Green at the back of the end zone to tie the match.

Kyler throws a dart to send the game to overtime. #Kyler #Cardinals pic.twitter.com/GUDIGHaMml

Arizona completed the comeback win in overtime when a tackle on Hunter Renfrow by Isaiah Simmons forced a fumble and corner-back Byron Murphy Jr scooped the ball up and ran back for a 62-yard walk-off win.

When the chips were down, the Cardinals scored 22 unanswered points for the third improbable high-profile comeback of the night.

*For more on Cincinnati Bengals v Dallas Cowboys, Atlanta Falcons v LA Rams and a round-up on the rest of Week 2, check out Smashmouting Football.


popular
Man United could be blocked from playing in the Champions League next season
Ireland team vs. France: Form players rewarded and a welcome return
Clive Woodward happy to 'eat humble pie' after bold comments about Ireland
Man United's four player transfer shortlist if Qatar takeover goes ahead
Man City expect Pep Guardiola to leave
"I should have been more mature" - O'Sullivan's injury trail a cautionary tale for Sigerson casualties
The Ireland team Andy Farrell needs to start when France come to town
You may also like
2 months ago
Patrick Mahomes shows young pretender how it's done in thrilling Chiefs comeback
2 months ago
Josh Allen and Buffalo Bills left stunned by 'greatest catch in NFL history'
2 months ago
NFL round-up: Patrick Mahomes the hero and Kirk Cousins living his best life
3 months ago
Tom Brady’s year goes from bad to worse as 49ers get themselves a true baller
3 months ago
Bill Belichick makes big quarterback call as Justin Fields win it for Chicago Bears
3 months ago
Taysom Hill puts together one of the most absurd performances in NFL history
Next Page