An incredible story, and what a way to finish... again.

In February 2020, Eric Weddle hung up his cleats and ended a 13-year NFL stretch as two-time First Team All Pro. It was a very good football career, but it was missing a Super Bowl ring.

END_OF_DOCUMENT_TOKEN_TO_BE_REPLACED

The free safety, who previously played with the Chargers and Ravens, signed a two year deal with the Los Angeles Rams in 2019 but only lasted the one season. When he announced his [first] retirement, former Rams quarterback Jared Goff simply tweeted, 'LEGEND'.

Married to Chanel, his high school sweetheart, Weddle has four children so retiring at 35 did not exactly mean he would be putting his feet up and polishing old trophies. He stayed in shape and, crucially, stayed in touch with Rams head coach Sean McVay.

In January, as Jordan Fuller and Taylor Rapp were ruled out, McVay scrolled through his phone and found Weddle's number. It would prove to be a smart call. 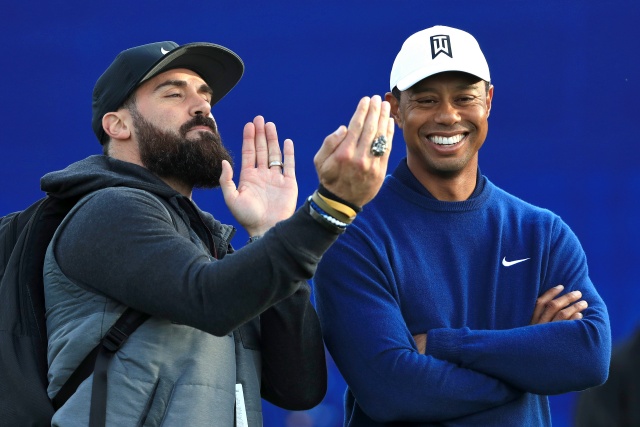 Tiger Woods shares a laugh with Eric Weddle during the Pro-Am for the 2020 Farmers Insurance Open at Torrey Pines Golf Course, in January 2020. (Photo by Sean M. Haffey/Getty Images)

END_OF_DOCUMENT_TOKEN_TO_BE_REPLACED

Sean McVay is one year younger than Weddle but has been in and around the NFL since 2008. He had coaching stints with Washington and Tampa Bay, but impressed the Los Angeles Rams owners enough to get their head coach job in 2017.

He got the Rams to the Super Bowl in just his second season but later admitted he had been out-coached by New England Patriots kingpin Bill Belichick as they lost 13-3. This season saw the Rams go out an acquire big names like Matthew Stafford, Odell Beckham Jr. and Vonn Miller, but Eric Weddle played a crucial role in the Rams' second ever Super Bowl triumph.

"Eric Weddle was sitting there at home!" says Scott McCabe of 'The Irish Punt'.

"The Rams are known for their electric offence, defence and their roster. And they were coined by many as tipped to win the Super Bowl, as we come into the season, because of how strong their roster was and the talent they had on it.

"But, as the season progresses - and its is the same every year - you get injuries and stuff happens, and players fall out, and whatever happens. The roster just got thinner and thinner at that [safety] position that Weddle plays.

"Weddle is at home, he’s just chilling out [but] he’s in constant contact with Sean McVay. Sean McVay is like, ‘Look, you’re experienced. Do you want to come back, to us, and help us on this journey?’

"Weddle, being the fan that he is, is like, ‘Okay’. So he comes back after two years out. He stayed in shape but he came back and he was phenomenal for them. He’s come in and you wouldn’t even know this guy had a break. It’s been really enjoyable to watch, and it’s another one of those Hollywood stories."

Only adding to the tale itself, Weddle suffered a tough injury, mid-way through the game, but was able to see it out to the end. 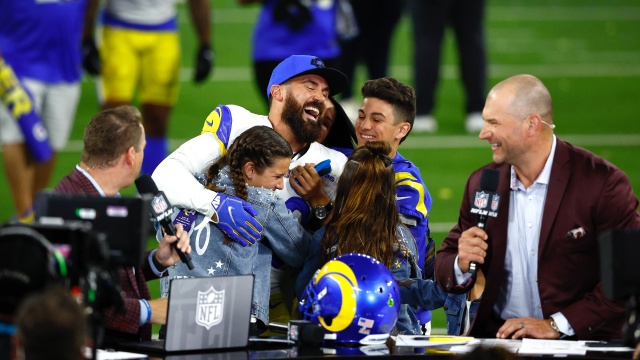 Early in the Rams' 23-20 victory over the Cincinatti Bengals, Eric Weddle put in a tackle on Joe Mixon that left him in some trouble.

He was seen to, out on the field, then checked over by medics on the sidelines. He confirmed, after the game that he had torn his pectoral muscle in making the tackle.

He was able to finish out the game, and was credited for five tackles, which took his playoffs tally to 18. Not bad for a guy drafted in just a month ago. After saying he would be heading for 'surgery soon', Weddle declared:

"I’m re-retiring. I’ll go back to my daily life. Pretty banged up right now, but well worth it. Well worth the moment."

A 13-season career that looked done in 2020 has now officially ended two years later with Weddle getting fitted for a Super Bowl winners' ring.

Now he can retire in peace, and with a healthy bonus on the way out.


popular
From Ireland to Argentina: Alexis Mac Allister's Irish roots explained
France demand FIFA change result of World Cup defeat over 'rule break'
World Cup 2022 Day 12: All the major action and talking points
The World Cup 2022 team of the tournament so far
Castleknock's Warnock the hero as Maynooth win first ever Ryan Cup final
Ronaldo finally reveals why he got that hideous haircut
Argentina reach World Cup last-16 with convincing win over Poland
You may also like
1 month ago
Tom Brady’s year goes from bad to worse as 49ers get themselves a true baller
1 month ago
Bill Belichick makes big quarterback call as Justin Fields win it for Chicago Bears
1 month ago
Taysom Hill puts together one of the most absurd performances in NFL history
1 month ago
Fan chooses poor time to approach Roy Keane at NFL London
1 month ago
Patrick Mahomes upstages Tom Brady to end controversial NFL week on a high
2 months ago
Miami Dolphins quarterback allowed to continue despite disturbing footage after head knock
Next Page