An NFL star is recovering in hospital after being shot multiple times during an attempted robbery, on Sunday.

Washington Commanders rookie running back Brian Robinson Jr took bullets to the "lower extremities" after an intruder tried to commandeer his car.

According to Washington DC police, the shooting was reported in the city’s northeast at around 6pm, on Sunday. The police are on the lookout for two possible suspects.

Washington Commanders running back Brian Robinson was just shot in an attempted carjacking on H Street in DC.

DC has become a crime-ridden cesspool and Muriel Bowser is too busy denying an education to half the city's black children to stop it. 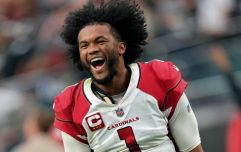 END_OF_DOCUMENT_TOKEN_TO_BE_REPLACED

Robinson, 23, has been taken to hospital with non-threatening injuries, according to a statement by the NFL team.

The team management met the player in hospital and said Robinson was in “good spirits”.

"I just got done visiting with Brian. He is in good spirits and wanted me to thank everyone for their kind words, prayers and support. He wants his teammates to know he appreciates them all for reaching out and he loves them all, and will be back soon doing what he does best."

I just got done visiting w/Brian. He is in good spirits and wanted me to thank everyone for their kind words, prayers & support. He wants his teammates to know he appreciates them all for reaching out and he loves them all & will be back soon doing what he does best. 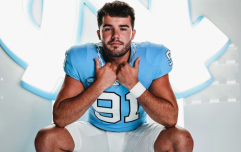 “I expect myself to be great” - Ben Kiernan, the Irishman with his sights on the NFL

END_OF_DOCUMENT_TOKEN_TO_BE_REPLACED

Robinson has been impressive during training camp and preseason games. He was expected to start for the Commanders this season.

The 6ft,1, 228-pound back rushed for 1,343 yards and 14 touchdowns last season at Alabama. The Commanders selected him with the 98th pick in the draft.

“Brian’s been great,” offensive coordinator Scott Turner said recently. “He’s a real serious guy. Football is extremely important to him. He takes a lot of pride in being a physical runner.”

You may also like
2 weeks ago
Tom Brady returns for 23rd NFL season as Patrick Mahomes lights it up
3 weeks ago
NFL season preview: Buffalo Bills hype, Jonathan Taylor praise and Tom Brady's unfinished business
1 month ago
Free pints "pandemonium" at Aviva Stadium during College Football Classic
1 month ago
Aer Lingus College Football Classic: What you need to know ahead of today's game
1 month ago
Tommy Bowe names five Irish rugby stars that could make it in the NFL
1 month ago
James McCourt on the brink of Irish NFL history after landmark move
Next Page