There is a long-held tradition in Irish rugby circles - make your Test debut and you get your absolute fill of booze.

The game has gone from the amateur to professional era but once you get your first cap, you will have to sink your fair share of alcohol from any player - teammate or opponent - that offers you a tipple.

While Luke Fitzgerald avoided the worst of this initiation by sneaking out early during a 2006 post-match function, most players that partake in a drink will have to sing a song and get inebriated.

END_OF_DOCUMENT_TOKEN_TO_BE_REPLACED

On this week's episode of The Hard Yards rugby podcast [below], Stephen Ferris and Kevin McLaughlin shared some class tales from their Irish rugby initiations. One name kept cropping up too - Ronan O'Gara.

Ferris explained how, after his debut against Pacific Islands in 2006 [the same game as Fitzgerald and Jamie Heaslip], he had to stand up in front of both teams, coaches and more than 400 people including a lot of "alickadoos" [IRFU blazers].

"You have to down a drink and sing a song... I sang the Fresh Prince of Bel Air song as I knew I'd remember the words." 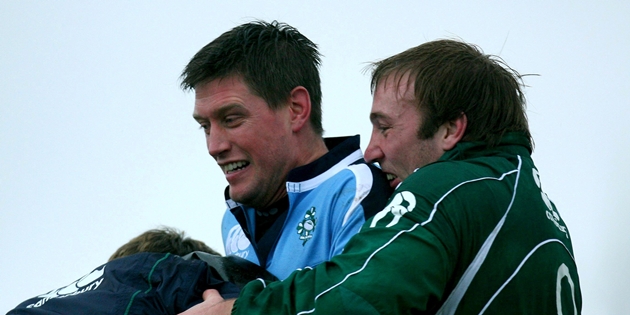 END_OF_DOCUMENT_TOKEN_TO_BE_REPLACED

For McLaughlin, his initiation came not long after he made his debut against Italy in 2010. The former Leinster flanker travelled to Paris as back-up to Ferris for a Six Nations date with France.

Ferris ended up playing the game but the Irish players had not forgotten about his initiation. McLaughlin commented:

"I had plans for a lovely Autumn week in Paris and didn't see it coming at all... Ferris had a couple of mates for his initiation but I was flying solo.

"We lost the game and didn't play particularly well so I thought there was no way they would do it that night. And then ROG [O'Gara] tipped my on the shoulder.

"I turned around and he had a pint of something in his hand. Well, two pints of something. He knocked one back, winked at me and handed me the other. I knocked it back."

END_OF_DOCUMENT_TOKEN_TO_BE_REPLACED

McLaughlin jokes that he started off feeling pretty confident about making it through the night in one piece but all that changed when he bumped into French hooker William Servat and a "bowl" of mint apértif called Pastis.

"It all went downhill from there," he remarked.


popular
Ireland team to play Wales: Andy Farrell's XV, the big calls and bold cuts
Ireland's self destructive mentality kills Croke Park fight for Katie Taylor
Roy Keane reminds everyone of his feelings towards Newcastle United ahead of cup final against Man United
Even Roy Keane felt Michael Dawson went too far with his remark to Tom Heaton
Everton release brutal 59-word statement to confirm Anthony Gordon departure
Five confirmed changes and guidelines to have big impact on 2023 Six Nations
Owen Farrell praises Johnny Sexton in revealing interview ahead of Six Nations
You may also like
14 hours ago
Ireland's self destructive mentality kills Croke Park fight for Katie Taylor
2 days ago
"I've heard people tipping Wales to beat us. I was actually offended!" - Greg O'Shea
2 days ago
"It's crazy to think Bundee Aki might come straight in and start against Wales"
4 days ago
Two Ireland stars included in Premier League's 'young English XI'
4 days ago
British publication urges Gareth Southgate to claim Evan Ferguson for England
1 week ago
The two toughest calls in Ireland team to face Wales are in the backline
Next Page