Jacob Stockdale on the training drill that "terrifies" Irish players

"It's the most terrifying moment of camp."

There was a famous Irish training session, back in 2015, when Joe Schmidt invited the Under 20s in to train with the senior team ahead of the World Cup. The young lads showed no fear, threw themselves about and there were a few feisty altercations.

From that squad, the likes of Jacob Stockdale, Andrew Porter and James Ryan are now fully fledged Ireland internationals, and Grand Slam winners to boot. Schmidt got so much out of that practice that he oftens gets the U20s in during Six Nations campaigns too.

One would imagine that Stockdale, Ryan and Porter could afford to look around now and enjoy the view. According to Stockdale - with 10 tries in 12 Test matches - he is already looking over his shoulder.

"Joe is bringing in young lads," Stockdale tells Baz & Andrew's House of Rugby, "and you have no option but to play well. If you don't play well, you're gone. That's that. That's how I felt when I first came into the set-up."

The Ulster winger is now 18 months into his senior career and he told former teammate Andrew Trimble [from 13:00 below] about a training drill they both used to do, with Ireland, and how it is still one that sets many players on edge. 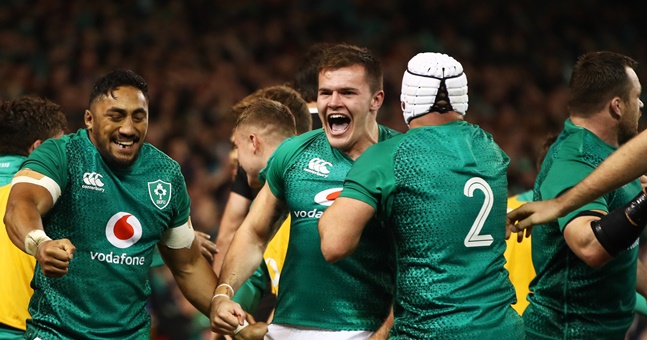 "That is the culture Joe has built in," says Stockdale, "that you have to be excellent every time you are on the pitch."

Players have to be clued in away from the pitch too. Trimble and Stockdale spoke well on a training exercise that Schmidt places a lot of stock in:

ANDREW: "I would take that even further... sometimes when you're even training with Joe... "

ANDREW: "The walk-throughs! You're not even getting out of the hotel."

JACOB: "Oh, it's the most terrifying moment of camp. You're going, 'Another walk-through to get through. Just survive!'"

ANDREW: "But it has that desired effect. If you're under that sort of pressure routinely, you start to get used to it. Then you can cope with the pressure at game time."

JACOB: "I think that's it. Joe says to you, 'I'm going to push you so hard in this so whenever you go into a game, you can handle it'. Faz [Andy Farrell] does that as well. He makes us defend with 10 men as says to us, 'Look, if you can D with 10 players, then in a game nobody should be scoring against you'."

END_OF_DOCUMENT_TOKEN_TO_BE_REPLACED

It will be heartening, for many Irish fans, to learn Andy Farrell, who will take over from Schmidt after the World Cup, has a similar mind-set to the Kiwi.

That approach has certainly paid off for Ireland in recent years, and will hopefully come in handy when the pressure is on in the Six Nations, and in Japan.


popular
QUIZ: Name the last clubs these footballers played for before joining Manchester United
SportsJOE 2000s Football Quiz | Round 1
The SportsJOE 12 o'clock quiz | Day 68
"I went up to the hotel, got attacked in the room and told I'm no longer Tipperary captain"
QUIZ: Name the footballers to have played for Manchester United & Real Madrid
QUIZ: Name these footballers based on their former teammates
The SportsJOE 12 o'clock quiz | Day 67
You may also like
4 days ago
Baz & Andrew's House of Rugby - Mike Brown on past battles with Ireland
1 week ago
"He walks into the dressing room and Pienaar goes, ‘We can’t win’!"
1 week ago
Baz & Andrew's House of Rugby - Finn Russell on life in Paris
2 weeks ago
Ben Youngs talks about Leicester Tigers' infamous Tuesday training sessions
2 weeks ago
Ryan Baird on his physical and mental preparations to hit rugby's return running
3 weeks ago
"He's a massive human being with an unbelievable skill level" - Jean De Villiers
Next Page