Former Munster utility back Paul Warwick has said that he was surprised with just how much Ireland scrum-half Conor Murray has achieved in the sport.

Warwick spent two seasons with Murray at Munster and attributes the strides that he has made with Munster, Ireland and the British & Irish Lions to his work ethic at training.

"I was surprised with Conor's success," said Warwick on the latest episode of The Hard Yards.

"I didn't think he would essentially be the best half-back in the world, which I believe he is at the moment. He's just phenomenal. He's obviously worked so hard on his skillset and he just dominates to be honest.

"He can control a game from nine as well which is pretty rare."

Munster's all-time appearance leader Donncha O'Callaghan told The Hard Yards last year that former Munster coach Tony McGahan was willing to back Murray from an early age at the province and that he spoke highly of the player, which was seemingly quite rare the Australian.

"Tony McGahan who was the coach at the time and who's really tough on guys, was always looking for the chink in the armour or their weakness and I remember how well he spoke of Conor and it would nearly shock you because to be fair, I don't really remember him speaking well of anyone!

"At a young age he was saying that Conor is the real deal and was willing to give him his head and push him on." 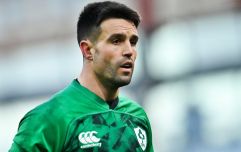 END_OF_DOCUMENT_TOKEN_TO_BE_REPLACED

"There were two standouts [in my time with the Munster academy], as close to certainties as we could make out, and that was Peter and Conor Murray," said Costello.

"The two of them came through and they only had a blur in the A team. They went straight from the academy into the senior team, and as an 8/9 combination back then, you just thought these two guys are going the whole way to the top.

"I know it's easy to say now, but I've probably never been as certain about two players as I was with them. They just happened to come together at the same time."

popular
In defeat, Jerry Kelly dies with his boots on in coming of age final display
"I knew I didn't have the pace or strength, it was just get it and try kick it left or right"
The SportsJOE 12 o'clock quiz | Day 286
QUIZ: You have 30 seconds to answer this one tricky football question
SportsJOE 2000s Football Quiz | Round 11
You'll have to be a diehard fan to get 20/20 in this Liverpool players of the 90s quiz
"Djokovic is a tool" - Tennis world turned upside down in day of days
You may also like
1 month ago
"That was a different regime" - An inside line on big changes within the Ireland camp
2 months ago
"We can make that extra improvement to get a result in Twickenham" - Conor Murray
2 months ago
"I was more thinking of my family. It's pretty **** they're not here" - James Lowe
2 months ago
Conor Murray 'a genuine option' to start No.10 against England
3 months ago
"That will certainly be a big battle for Munster's No.9 jersey in the coming years"
4 months ago
Abraham Papali'i shown straight red card for crunching tackle on Conor Murray
Next Page