Conor Murray: The best number nine in the world?

58 minutes on the clock, Ireland are in danger of buckling.

The excitement after Simon Zebo added a fourth try is being filed under the category that we all got carried away with ourselves too soon and that we underestimated the All Blacks and that maybe we forgot that we're still Ireland and from the northern hemisphere and all the punishing self-discipline that doubt brings with it.

A 22-point gap is now eight and 111 years are weighing heavier on the green jerseys.

Johnny Sexton goes down and he's not ever there to ease the tension with a penalty that has never felt so important. If Ireland miss with 22 minutes still to play, they won't do it, it's as simple as that.

The All Blacks will smell blood like they sniff out better than anyone on the planet and we'll be reeling out all the synonyms for words like brave and courageous that will headline match reports telling the story of another gallant loss. A heroic failure.

Well Conor Murray doesn't want to hear about that shit again. He's having none of it.

The Munster scrumhalf stepped up and he hoisted all the hopes, fears and history of one country onto his shoulders and, like a sportsman of pure skill, a soldier of real nerve, he booted Ireland's most important three points between the sticks and demanded that the rest of the team follow him.

END_OF_DOCUMENT_TOKEN_TO_BE_REPLACED

That wasn't luck that he nailed that penalty. It wasn't a gamble. It wasn't a last resort. Murray has perfected his game - every facet of it - and it all came pouring out in spectacular fashion in Chicago when Aaron Smith lined up opposite him and only one number nine came away with the acclaim of the globe.

It was 27 years in the making - the making of one of the finest - and that penalty kick was no coincidence.

'In 2013, while on the Lions tour to Australia, coach Gareth Jenkins noticed Murray sticking around after training to practice his goal-kicking with the likes of Johnny Sexton and Leigh Halfpenny,' SportsJOE's Patrick McCarry wrote about the slog and sacrifices that have gone into Murray's game.

'It was something he has always done for Munster.

'Jenkins, who kicked the Lions to a series victory against South Africa in 1997, was so impressed by Murray's technique that he advised him to seriously consider it as an option in matches. The following season saw him lap over two conversions in a Guinness PRO12 win over Edinburgh.' 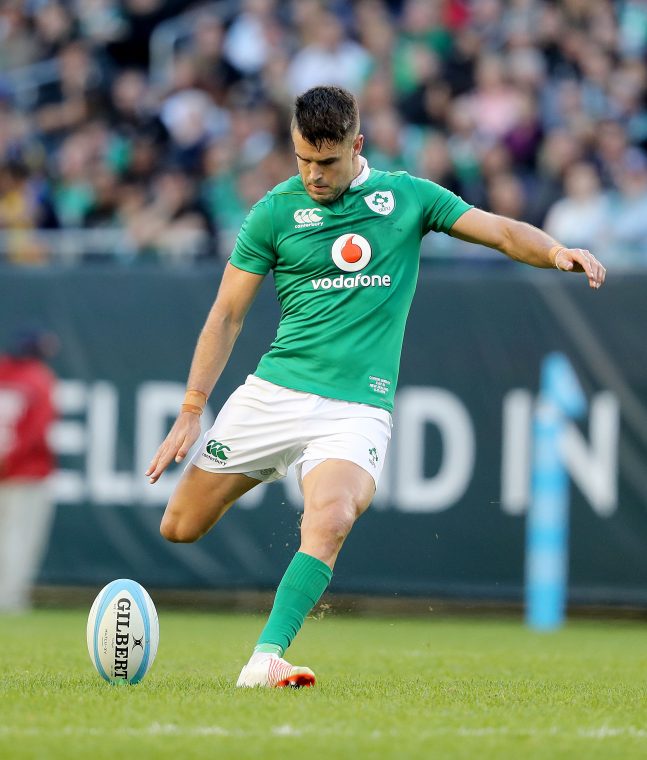 32 minutes are on the clock, Ireland are pushing again. They're pushing because Conor Murray isn't standing back in awe of New Zealand. He isn't playing the jersey or the occasion. He's right up in the opposition faces and he wins the ball back for Ireland and forces them onto the front foot.

It comes back to him and, with one dummy and dropped shoulder of nothing but pure respect for his own talent, he bursts for the try line with seven Irish subs in gold bibs jumping manically to greet him beneath the posts.

WATCH:
What a try from Conor Murray! That is simply brilliant from the Munster man. #NZLvIRE https://t.co/T8gfUt1oA8

END_OF_DOCUMENT_TOKEN_TO_BE_REPLACED

Five minutes left and the pressure is palpable. Ireland are just four points to the good and haven't scored since Murray's penalty. Many a good side has crumbled like this. You can take the All Blacks so far but if you don't kill them off, they will more than likely devour you at some stage.

Too many countries have had the same hard luck story and, once again, despite what has been a monumental display from the Irish, we're doubting ourselves. We're looking on through the cracks in our fingers wondering if New Zealand will spare us or kill us but Conor Murray is not waiting on what the bloody opposition wants to do.

He's playing this game on another level entirely and it is inspiring to just catch a glimpse of this man committed so wholly to one game of rugby as if nothing else in the whole world matters. If ever a performance summed up what tuned in and wired to the high heavens meant, this was it because Murray was on it and then some.

Ireland concede possession for territory in the 75th minute but New Zealand look to launch quickly through the hands and it is terrifying to watch on at how many green bodies have committed themselves. Julian Savea gets on the ball and a nation and however many Americans calling themselves Irish hold their collective breath.

Savea is stopped dead at the source.

He's hit with all the frightening momentum of 95kg of Munster's finest and he's tossed to the turf by one possessed number nine playing rugby in a different dimension.

How big was this tackle from Conor Murray? What a sensational performance from the Munster man. #NZLvIRE https://t.co/DknArsHLTT

END_OF_DOCUMENT_TOKEN_TO_BE_REPLACED

They call Savea 'The Bus' in New Zealand. Well, Conor Murray caught the bus and he crashed it on its f**king side.

It summed up everything that was good about Ireland on one historic day in Chicago. It summed up the steel, the aggression, the mental application and the belief. It summed up Conor Murray and what was one of the all-time great performances.

A performance of talent. One of balls. And one of heart.

The former Garryowen man laid it all on the line on November 5 and he showed Ireland, New Zealand, and the entire world the very best of what this country has to offer. He showed everyone what Conor Murray is about.

He showed them all why he could just be the greatest number nine on the planet.

To a man we were brilliant but @ConorMurray_9 once again was ridiculous!!!


popular
We knew Sean O'Brien wouldn't let us down with his Lions XV
Bill Shankly’s grandson asks for statue to be removed from Anfield
'War-scene' in Tyrone dressing room before 2005 final sums up an iconic team
Keith Earls backed for Lions XV by one of the best in the game
'Make him hurt, make him yours' - How the Springboks ruled the world
The SportsJOE 12 o'clock quiz | Day 335
Ranking the top 10 signs as football fans stick it to the European Super League
You may also like
1 week ago
The six Lions spots being contested by Ireland and Scotland players
1 week ago
Rating the chances of Leinster's 16 Lions hopefuls
1 week ago
Jamie Carragher on how close he came to Ireland call-up
1 week ago
Full player ratings as Ireland dismantle Wales in Six Nations opener
1 week ago
Munster and Irish rugby almost lost out on one of their brightest stars
1 week ago
"I wake up in a cold sweat. I cannot, for the life of me, remember where my jersey is"
Next Page