Damn, this is a shame.

Saturday evening's clash at the Sportsground between Connacht and Leinster was an absolute cracker.

Leinster ran out 37-24 winners in what was an exhilarating game of rugby.

Seven tries, including five from the away side, meant that punters definitely got their monies worth and for all those who took the time out to watch the game on TV.

The result means Leinster have consolidated their top position in the PRO 12 table. 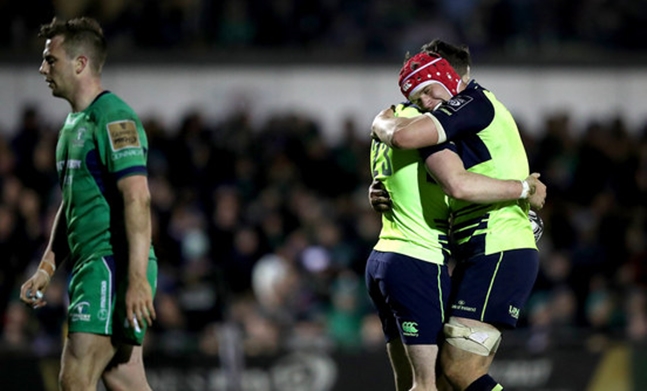 They are three points ahead of Munster who are in second.

Connacht meanwhile, lie in eighth position, meaning they are destined for a playoff fixtures to ensure their Champions Cup participation next season.

One of the key narratives to Saturday evening's fixture in Galway was the performance of Bundee Aki.

The Connacht fan favourite put in an energetic performance which we have come accustomed to.

However, he was also quite vocal with the referee, and this was beginning to get on the nerves of man in the middle, Ian Davies.

There's one pissed off ref going for a straight up choke on a yapping Bundee Aki...#CONvLEI pic.twitter.com/PVEmtv1egl

Here was the first exchange between Davies and captain John Muldoon.

Davies: "He's got a bit loud now so turn him down."

After that, there was another exchange between the referee and Muldoon.

Only this time, Aki was called over to so he knew exactly what the problem was.

The referee warned Muldoon that one more bit of backchat from Aki, and he would be off the field.

Thankfully it didn't come to that but what happened once the game ended definitely leaves a sour taste.

Aki looks to give Davies the cold shoulder in the respected and traditional post-game handshakes and we must say, this sort of thing doesn't belong in rugby.

We can understand Aki feeling aggrieved and pissed off after losing such an important game.

But his behaviour is unacceptable and you just know this sort of thing would not have gone unnoticed by Joe Schmidt who was watching on from the stands.


popular
You have five minutes to name these four footballers, but it probably won't be enough time
"There's a nice bit of balance in that full forward line" - Mayo moving well
The SportsJOE 12 o'clock quiz | Day 212
Bruno Fernandes had an endearing reaction to being named Man United captain
Alfredo Morelos on ultimate wind-up as Shane Duffy has day to forget
House of Rugby Ireland returns with new look, and new hosts
The SportsJOE 12 o'clock quiz | Day 211
You may also like
1 week ago
"Two absolute bulldozers" - Gordon D'Arcy on the toughest centres he ever faced
1 week ago
Jordan Larmour a major doubt for Six Nations after bad arm injury
2 weeks ago
Josh van der Flier shares training routine and drills needed to survive at the top
2 weeks ago
Josh van der Flier recalls first Leinster training session with Brian O'Driscoll
2 weeks ago
"Too simplistic" to say Irish players struggling with English power game - Stuart Lancaster
3 weeks ago
Stuart Lancaster and Leinster focus on positives after Tadhg Furlong set-back
Next Page