He may have a bantamweight's frame, but Frankie Edgar has the heart of a heavyweight.

The Answer entered into his dual against knockout monster Jeremy Stephens at UFC 205 off the back of one of the toughest losses of his career. Edgar was thoroughly outclassed by Jose Aldo over five rounds in his interim featherweight title bout at UFC 200, but despite being dominated by Scarface, he never stopped working.

This mentality stuck with him when he stepped into the Octagon against Lil Heathen in Madison Square Garden.

Edgar edged a tentative first round as both fighters tried to feel each other out. A brief takedown and slightly better striking accuracy saw the former lightweight champion take the first.

However, he found himself in deep waters in the second when he found himself stumbling to the mat after eating a huge head kick that was followed by a forceful knee attempt on the ground. Edgar was noticeably stunned after the exchange, but managed to get back to his feet and maintain a safe distance to recover.

Still unsteady on his feet, Edgar managed to score the takedown with a minute left in the round. Stephens tried to stand back up, but Edgar latched onto a guillotine choke attempt that he almost locked in before the bell sounded. 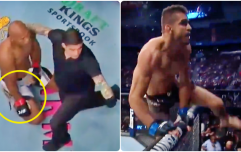 END_OF_DOCUMENT_TOKEN_TO_BE_REPLACED

The New Jersey native got off to a flier in the final round, scoring a big takedown in the first minute. Stephens appeared to lock in a kimura from the bottom and hyper extended Edgar's arm, but the Answer remained composed in the face of adversity and broke free. Stephens got the fight back standing for the last two minutes, but was unable to land anything of note.

The judges awarded Edgar the unanimous decision (30-27, 30-27, 29-28), an impressive feat considering he came into the fight with a torn MCL. He admitted after the bout that it would take a lot more than that to keep him from competing on the historic card.

Frankie Edgar: " I actually tore my MCL and had to get an epidural in my back but nothing was going to stop me from fighting in NYC." Wow!