Another captivating tale from the UFC's greatest ever trash-talker, Chael Sonnen.

The former UFC middleweight and light-heavyweight title contender made a very entertaining appearance on Monday's MMA Hour in which he divulged some new information about the disastrous Ultimate Fighter Brazil 3 season.

Sonnen coached opposite Wanderlei Silva in the season which started off pretty terribly and only got worse, despite the fact that it introduced fans to quality fighters such as Warlley Alves and Antonio Carlos Junior.

END_OF_DOCUMENT_TOKEN_TO_BE_REPLACED

The infamous brawl that you saw in all the promos for the show almost didn't happen as Silva threatened to walk out of the production on the first day of filming. Sonnen explained that he had to have a sit-down with the Pride legend to try to get him to stick it out, and to get him to stay, he resorted to a "dick move".

"So I’m explaining this thing to him, and he’s telling me how to do it. ‘You’ve got to do this and you’ve got to do that.’ I just stop and I go: ‘Wanderlei, stop. Between us, just stop. I am the highest paid fighter in the history of the sport. I’m the biggest draw in the history of this sport. Do you really think you should be giving me advice, or should you be taking it? Should you be copying me?’"

“He just tore right into me. This is the dick part. So, I’m on my phone. I’ve got my phone, I bank with Bank of America, I’ve got a mobile app. I log into my Bank of America app and I just show it to him. And I said, ‘do you really think that you should be giving me advice, or should you just come along for the ride and let me take it from here?’" 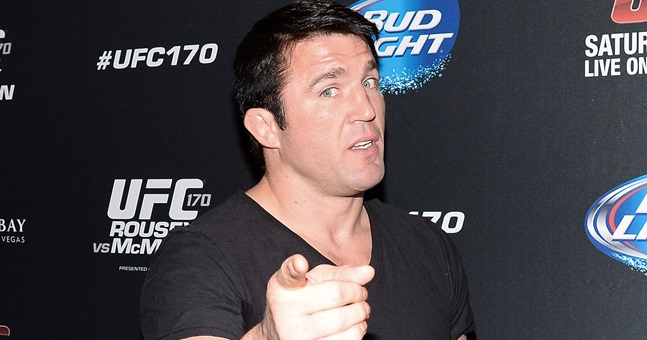 According to Sonnen, that was enough to convince Silva to carry through with filming.

“And his whole expression, he didn’t say it but he was like, alright, let’s go do the show. And that’s actually where that ended. I know that makes me a prick, but that’s what changed him right there, is I freaking showed him, ‘hey, I know what I’m doing here. You do your thing and let me carry us.'”

And then not long after, they brawled.


popular
World Cup 2022 Day 12: All the major action and talking points
France demand FIFA change result of World Cup defeat over 'rule break'
Cristiano Ronaldo 'agrees £173m-a-year deal' with Saudi club
Damien Duff makes 'brutally honest' England World Cup prediction after Wales win
"Nowadays, even if I don't hit a ball, I don't care as long as we win" - Gleeson learning from the past
Castleknock's Warnock the hero as Maynooth win first ever Ryan Cup final
Thibaut Courtois warns teammates after leaks emerge from Belgium camp
You may also like
2 months ago
Hasbulla signs five year deal with UFC 'worth more than many fighters'
2 months ago
UFC fighter Elias Theodorou has died, aged just 34
2 months ago
John Kavanagh and Johnny Walker kicked out of T-Mobile Arena during UFC 279 main card
2 months ago
Conor McGregor took exception to one part of Nate Diaz victory speech
2 months ago
Nate Diaz and Tony Ferguson tossed together for UFC 279 main event after wild 24 hours
3 months ago
Your guide to a huge weekend of sport and how to watch it all
Next Page