MMA fighters are supposed to have good timing.

So we're scratching our heads this morning trying to figure out why, in the wake of all that has happened in Paris over the last few days, Uriah Hall wouldn't be a bit smarter with his words when criticising UFC fans.

Hall lost to Robert Whittaker at the weekend in Melbourne, but has now laid into some followers of the sport, who have danced with glee at the demise of headliner Ronda Rousey at the hands of Holly Holm.

That would normally be okay, if he hadn't compared those fans to terrorists in an Instagram post last night. 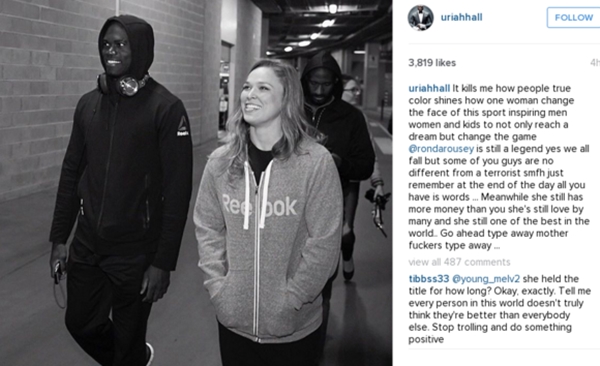 In a lengthy post the middleweight clearly had a brain fart,

"It kills me how people true color shines how one woman change the face of this sport inspiring men women and kids to not only reach a dream but change the game @rondarousey is still a legend yes we all fall but some of you guys are no different from a terrorist smfh just remember at the end of the day all you have is words ... Meanwhile she still has more money than you she's still love by many and she still one of the best in the world.. Go ahead type away mother fuckers type away ..."

He did later change the post to say 'sh*t stains' instead of terrorists before deleting the entire thing.

But the damage has been done.


popular
Roy Keane reacts to Brazil's jubilant celebrations in first half demolition job
World Cup 2022 Day 16: All the major action and talking points
Didi Hamann thought Brazil substitution was "disrespectful" to South Korea
Roy Keane handled Gary Neville’s goal celebration as most Irish fans would
World Cup 2022 Day 17: All the major action and talking points
Portugal boss could strip Cristiano Ronaldo of captaincy
Rory McIlroy explains 'falling out' with Shane Lowry that lasted a few years
You may also like
6 years ago
Ronda Rousey received Rocky Balboa-esque support from Kobe Bryant after Holly Holm defeat
6 years ago
Holly Holm issues ominous warning to Ronda Rousey and the rest of the division
6 years ago
Aussie state banned betting on Rousey v Holm because of UFC corruption fears
6 years ago
"I'm always f**king scared" - The best quotes from the remarkable ESPN Ronda Rousey interview
6 years ago
Sad Ronda Rousey reveals jaw injury at UFC 193 means she faces a miserable Christmas
7 years ago
REVEALED: This is what Holly Holm said to Ronda Rousey right after she knocked her out
Next Page