Urijah Faber is a Belieber and we all must learn to accept it.

The UFC bantamweight contender admitted he was happy when the Canadian songstress settled his beef with Nate Diaz, after he criticised the Stockton native for his fighting style against Conor McGregor at UFC 196, Fox Sports reports..

"I think he got a little bit of humble pie when he started talking about Nate's technique because Nate is a savage beast in this sport who has put in so much time and so much effort. So, I saw them take a picture together, which I was happy about because I'm a Bieber fan and Diaz is a good friend of mine. I'm glad that Diaz didn't slap him." 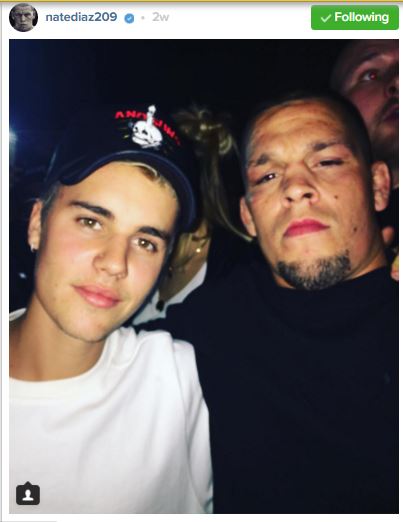 Hold on a second... did Faber just out himself as a Belieber? Well, the Californian Kid has a very good reason for embracing Bieber's love of MMA - it's good for the growth of the sport.

"It's great. They should be fans of our sport, it's the greatest sport in the world. I like that he likes the sport and that other people like the sport. They should. We're doing battle. We're gladiators. I appreciate everything they do as well. I loved to be entertained by the entertainment community it's mutual respect, for sure."

When asked how he thinks Bieber would fare inside the cage, Faber thought that Bieber's heightened confidence could make him a force to be reckoned in combat sports, if he opted to learn the sport.

"This is all relative to him learning the sport but a guy like that has confidence. That's the biggest part of our sport, is self-confidence, and self-belief. So, yeah, I think Bieber would be good."

"Now, we have to learn a hard lesson of what you need to do, of course, but I heard he trains with Floyd [Mayweather Jr.] so, why not? I'm not someone to tell someone else that they're going to get beat up. That's a very personal thing, and we can test it out by throwing him in a cage. Bieber might be able to kick everyone's ass. Probably not, but ..."


popular
Mario Balotelli, Luis Suarez, Fernando Torres and why Rio Ferdinand "hated them"
"I don’t trust you" - Joey Barton delivers brutal dismissal of Irish defender
"I remember just hugging this Irish guy" - How one Kiwi rugby star reacted to Ireland's historic series win
Quiz: Name the top goalscorer from every Premier League season
Gatecrashed interviews and chip-shop previews - Wexford GAA's online coverage sets the standard
"I'll ask for everyone that comes to the game to wear purple and roots for us" - Pat Fitzgerald
Former manager Paudie Murray doesn't spare Cork after camogie final loss
You may also like
1 month ago
Ian Garry makes American opponent rue pre-fight comments at UFC 276
1 month ago
Jorge Masvidal speaks about defending BMF title against Conor McGregor
2 months ago
Dana White reveals who Conor McGregor could fight on UFC return
2 months ago
Your guide to a great weekend of sport and how to stream it all
2 months ago
Conor McGregor says he knows his next UFC opponent and fight date
3 months ago
Commentating cage-side, Daniel Cormier missed the UFC knock-out of the year
Next Page