SportsJOE speaks to JJ Aldrich, the most Irish fighter on the Ultimate Fighter 23

If Irish fans are looking for someone to support on season 23 of the Ultimate Fighter, JJ Aldrich is your best bet.

All you have to do is look at some of her fights under the Invicta banner to know that the 23-year-old strawweight is proud of her Irish heritage. When she fought Rosa Acevedo at Invicta 14, JJ looked like a human Irish flag, donning an orange shirt, green braids and with her tri-colour banner strewn across the top of the cage behind her.

The daughter of an Irish father, who was adopted by an American family at a young age, with her grandfather on her mother's side hailing from Cork, she has come to accept that no matter where she is fighting, people will already know about her Gaelic roots.

"Everyone knows me as Irish. Even for my fight to get into the TUF house, the referee said he almost didn't recognise me without the green."

END_OF_DOCUMENT_TOKEN_TO_BE_REPLACED

Growing up in a strong Irish-American community in Colorado, JJ regularly attended her town's huge St Patrick's Day festival with her mother. This connection to her ancestral home has continued in her passion for the fight game.

"I always support all the Irish fighters. The likes of Paddy, Conor and Aisling. I like Conor so much because he's Irish representing Ireland and he has all of the country behind him. He's also a true martial artist.".

"My training partner Rose (Namajunas) was on the same show as Aisling Daly. She's tough - a true representative of what tough is." 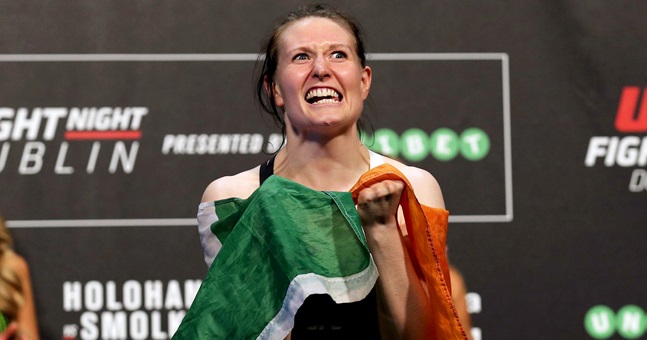 JJ is extremely grateful that her profession has allowed her to travel across the the United States, citing Hawaii in particular as one destination she was thankful to get to visit. However, there is one place where she would love to fight above all others.

"I have never had the opportunity to fight in Ireland, but that is the ultimate dream of mine."

END_OF_DOCUMENT_TOKEN_TO_BE_REPLACED

She admitted that the loyal support the Irish fans give their fighters, whether in victory or defeat, is a big factor in her desire to fight in Ireland. She witnessed this first-hand at UFC 196, seeing how the travelling supporters reacted to Conor McGregor's submission loss to Nate Diaz.

"I see how much the Irish people love their own fighters and take them in. I was fortunate enough to see Conor McGregor's last fight and although Conor lost, the fans were sad to see Conor lose, but also because they felt like they lost as well."

END_OF_DOCUMENT_TOKEN_TO_BE_REPLACED

JJ, who was the number one pick on Team Joanna Jedrzejczyk, takes on Claudia Gadelha's number one strawweight Tatiana Suarez in the first elimination round set for broadcast on Thursday. Suarez (3-0) is a strong wrestler and she knew her gameplan was to try to use that to her advantage.

However, taekwondo black belt Aldrich's plan was to go in looking to fight on the feet. She attributed her love of a good scrap to "the Irish" in her.

Catch The Ultimate Fighter at 3am BST every Thursday morning on BT Sport (part of the Setanta pack in Ireland). Repeated at 10pm BST on Thursdays.


popular
"I never really cried or got emotional over what I've done as an individual. I couldn't give a s***"
"If I break my wrist, it's on f***ing both of you." - Koepka and Berger act the spoiled child
"I was off the grid" - Aidan O'Shea respond's to Mayo criticism after club championship win
The FootballJOE Pub Quiz: Week 7
Dessie Farrell needs to make Paul Mannion return a top priority
'I won The Open by six shots in my home country, but this was the best week of my golfing career'
Garry Ringrose raves about four young Leinster stars to watch this season
You may also like
2 months ago
UFC appears to have signed a new Irish fighter
2 months ago
Conor McGregor labelled an 'easy payday' who can't compete with top UFC fighters anymore
2 months ago
Khabib says McGregor is "finished" as Dos Anjos makes his play
2 months ago
Shocking post-fight footage shows McGregor threat that upset Poirier so much
2 months ago
Conor McGregor posts first Instagram since last night's defeat
2 months ago
"I'm nice, now I'm mean, I started nice, now I'm back to mean" - Dominick Cruz slams McGregor's changing personas
Next Page