TJ Dillashaw has dismissed concerns about his cut to flyweight.

Dillashaw is well on his way down to 125lbs in his bid to add the UFC flyweight title to his bantamweight crown and has eased any doubts that he will make weight for his upcoming clash with Henry Cejudo.

Dillashaw and Cejudo will headline the UFC's first card as part of their new deal with ESPN on January 19.

END_OF_DOCUMENT_TOKEN_TO_BE_REPLACED

In the build-up to the bout, Cejudo's manager Ali Abdelaziz claimed that a plan was in place to have Joseph Benavidez, who is scheduled to fight Dustin Ortiz on the undercard, step in to fight his client if Dillashaw fails to make 125lbs.

"I don’t think TJ’s going to make weight and if he misses weight by .1 pounds, Joseph Benavidez is going to fight, we’re going to give Joseph a shot," Abdelaziz said in a recent interview with MMA Fighting.

END_OF_DOCUMENT_TOKEN_TO_BE_REPLACED

"Because I personally don’t think he’ll make it. If he makes it, he’s going to be weak, fragile, and he’s going to have a long, long night with the champ. He’s a good fighter, but he can’t fight at the pace Henry’s going to fight him at 125. He doesn’t have the speed to fight Henry."

Dillashaw appears to be in great shape as his training camp tapers down and he responded to Abdelaziz's claim by revealing that he is closer to his new target than he typically is at this stage of his preparations for fights at 135lbs. 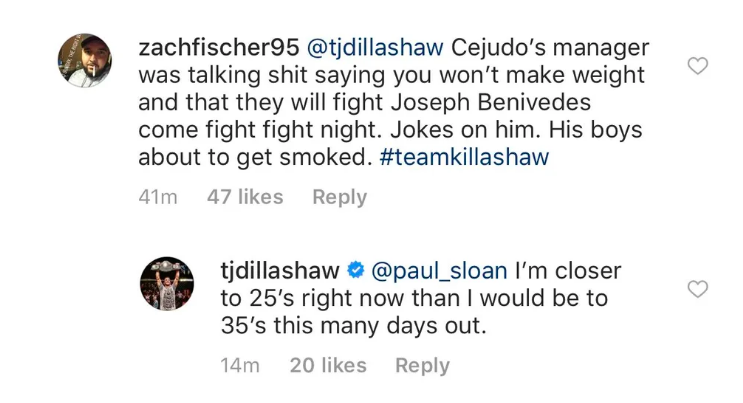