REVEALED: Jon Jones finally speaks about the crazy night that saw him stripped of his UFC belt

"It has been eventful, for sure."

That is how Jon Jones sums up the chaotic last six months of his life.

In April, Bones ran from the scene of a crash in Albuquerque, New Mexico, that left a pregnant woman with a broken arm. He is currently serving 18 months of probation but is already plotting his comeback.

Jones admits it was a "weird night" watching Anthony Johnson and Daniel Cormier fight for his vacated light heavyweight belt, earlier this year, but feels his focus has returned. If his latest interview with MMA Fighting's Ariel Helwani is anything to go by, he certainly seems serene.

Getting back in the octagon would be a bonus and he is looking forward to putting the cherry on top of his already storied career.

For the first time, however, we get to hear Jones' take on that fateful April 25 night.

He was watching UFC 186 with friends, in Montreal.

"I had a great night and ended up going to a bar afterwards," he said. "I drank quite a bit; had a good time with the boys.

"After that, I got a ride to a house party; drank a little bit more and I decided to stay the night there." 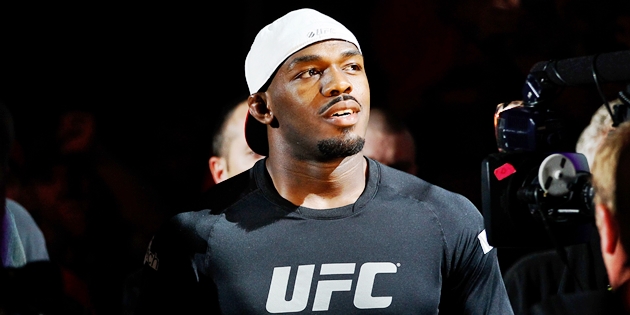 END_OF_DOCUMENT_TOKEN_TO_BE_REPLACED

Jones continued, "The whole [party] was crazy... A lot of heavy drinking going on.

"I go to bed thinking [that] obviously you don't drink and drive. A lot of my friends wouldn't allow me to get another D.U.I (Driving Under the Influence).

"So I went to bed and got up the next morning. Everybody was gone from the house party. My boy and his wife were there and I'm thinking 'Okay, this guy has a kid and a family. I obviously should leave this party because it's not a party any more.

"I got in my car and I definitely still was really tired... I remember being at a red light; I had my music going and was texting on my cell-phone. I see the light go green and I assumed it was my green light. It was a green light for people going straight in traffic, and I was actually turning.

"I just stepped on the gas when I saw the green light and I drove right into oncoming traffic."

Jones' actions caused a three-car accident. Asked what was going through his mind at the time, he answered:

"It all happened so fast. Initially, I knew I messed up. Big time.

"First, I realised I wasn't hurt... I thought 'Nobody has gotten hurt. Maybe we didn't hit that hard'.

"I was afraid, man. I freaked out. I didn't want to talk to the police at the time so I thought I'd get away from this."

Jones refutes the claims that he ran back to his rental car to remove a large sum of money before he fled the scene.

"That never happened. That's not accurate... My money is in cash deposits and investments and sh*t.

"I just had tunnel vision man."

After getting five yards from his career, Jones remembered that he had a marijuana bowl resting in his car's cup holder. He returned to the vehicle to grab it as 'everything would be much worse' if it was discovered by police.

Jones says he only discovered that a pregnant woman was involved in the crash when he got back to his hotel. His wife rang him to tell him what happened and told him to Google his own name.

He followed that advice, cried for hours after that and eventually rang a lawyer. "At no point was I hiding from the police," he declared.


popular
Jose Mourinho is the picture of happiness and health after Spurs sacking
In 86 seconds, Patrick Bamford becomes English football's voice of reason
Springboks legend Tendai Mtawawira tells us what he really thinks of Ellis Genge
'Make him hurt, make him yours' - How the Springboks ruled the world
'Beast' Mtawawira is a big fan of Mike Ross' Lions front row
Jose Mourinho is about to step up and become the hero football needs
"We did find him hours later and we made up." - How Flynn and his best friend came to blows in Croke Park
You may also like
2 weeks ago
Exciting UFC 264 card takes shape as McGregor signs up for trilogy
4 weeks ago
Dejan Lovren lasts entire minute in cage fight with UFC legend Mirko Cro Crop
4 weeks ago
From homelessness to the brink of securing a contract with the UFC
1 month ago
UFC announce lightweight title fight after Khabib officially retires
1 month ago
"I'm sorry" - New bantamweight champ in tears as UFC history is made
1 month ago
Conor McGregor bought out of Proper 12 whiskey company
Next Page