It's going to get an awful lot worse before it gets any better.

All three fighters punished competed at UFC on Fox 17 and MMAJunkie confirmed the news on Wednesday evening.

END_OF_DOCUMENT_TOKEN_TO_BE_REPLACED

"This week will be the first time that we will be issuing reduction in payments for non-compliance with the policy," UFC Senior VP of Global Consumer Products Tracey Bleczinski told MMAJunkie.

The UFC also revealed that a further 12 athletes had been issued with warnings for failing to comply with the oft complained about Athlete Outfitting Policy since it came into action in July.

It's been confirmed that Donald Cerrone was one such athlete and he revealed that he was punished for stitching a patch into his Reebok shorts for his main event bout with Rafael dos Anjos.

While that infraction is obvious, we've done some digging and believe we've discovered the remaining two fighters hit with fines from the Florida event.

SportsJOE understands that Nate Diaz began his open workout sporting his trademark Represent shirt rather than a Reebok approved top that all fighters must wear for events on fight week. 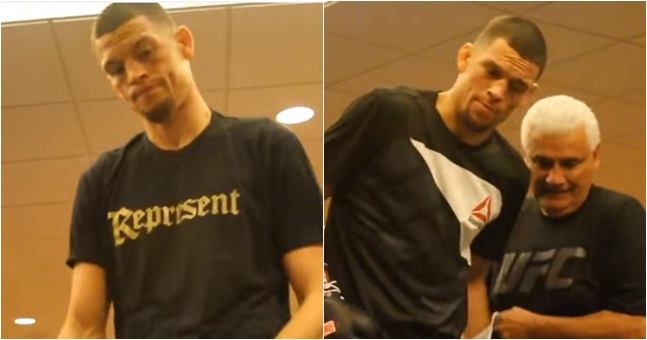 END_OF_DOCUMENT_TOKEN_TO_BE_REPLACED

An official obviously had a word with the lightweight as he finished out the session in a Reebok shirt.

That's likely the second offender but we also believe that we've learned of the third person to be issued with a non-compliance order as Danny Castillo's cornermen were seemingly disparaging towards the brand after the Team Alpha Male featherweight dropped a split decision to Nik Lentz last month.

This clip shows Castillo's cornerman Justin Buchholz trying to urge Castillo to wear his Reebok shirt for his post-fight interview before his other coach can be overheard saying "fuck their shirt."

This is the instance that we're least sure of all three but, with the way that Reebok have operated in the last six months, it wouldn't surprise us to learn that Castillo had also been punished for this.