UFC flyweight Ryan Benoit has been handed an indefinite suspension by the Texas Department of Licensing and Regulation.

And believe it or not, it's not for kicking Sergio Pettis up the arse after the final bell.

No, rather it's for this nasty broken cheekbone that he suffered in the first round of his fight against heavy favourite Sergio Pettis at UFC 185 on Saturday night. 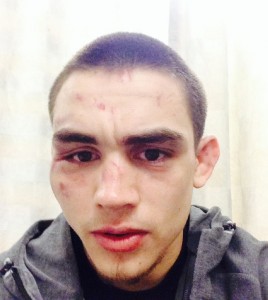 "Baby face" might have to change his nickname because there's nothing adorable about the crazy amount of swelling that the 8-3 American showed off after his comeback win. 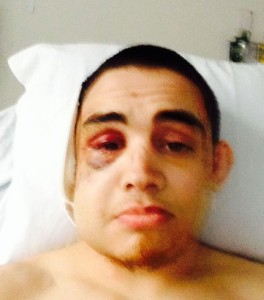 It's safe to say that Benoit won't be having steak for dinner any time soon.


popular
Noel Gallagher left 'covered in blood' after headbutt from Ruben Dias’ dad
Cutting through the contradictions from one of the worst television segments of the year
Aiden McGeady details the abuse he suffered after playing for Ireland instead of Scotland
Roy Keane shows great comic timing after Jack Grealish party invite
BBC apologise after accidentally posting mocking Man United message live on TV
The FootballJOE Pub Quiz: Week 38
France the sore losers as Ireland Men reach first ever Sevens World Series final
You may also like
7 years ago
Vine: Ross Pearson's vicious left hook knockout at UFC 185 was a thing of beauty
7 years ago
Conor McGregor's hopes of making UFC history were dashed last night
7 years ago
VINE: Joseph Duffy makes a successful start to his UFC career with a first round TKO
7 years ago
John Kavanagh, Cub Swanson and the MMA world react to Joseph Duffy's phenomenal UFC debut
7 years ago
GIF: Sergio Pettis gets the Bishop Brennan treatment at UFC 185
7 years ago
UFC 185: SportsJOE picks the winners so you don't have to
Next Page