Nate Diaz not messing about with bullish McGregor vs. Khabib prediction

Nate Diaz did slap both men, but one was outside the Octagon.

Conor McGregor and Khabib Nurmagomedov both have colourful history with Nate Diaz.

Twice in 2016, Diaz and McGregor had the fight world rapt with their headliner fights - and press conference antics - at UFC 196 and 202. The Californian submitted McGregor in the first bout but he avenged that loss with a unanimous points win, five months later.

McGregor has vowed to give Diaz his trilogy fight one more than one occasion, most recently at the final UFC 229 press conference in the Park Theater, in Vegas. Diaz has responded to that statement and also given his take on a man his has a longer-running beef with.

Back in August 2015, Khabib Nurmagomedov got into a dust-up with the Diaz brothers at World Series of Fighting (WSOF) 22.

Nate and Nick Diaz traded blows with Nurmagomedov and members of his entourage up in the stands and, not long after, out near the foyer of Las Vegas’ Planet Hollywood Resort & Casino.

'The Eagle' claimed he only reacted to the provocations of the Diaz crew after they went at him and his colleagues a second time. He told MMA Junkie:

"You know, fights happen between men. It's okay. It's normal. Sometimes it happens. But you know what? I’m a professional fighter. I’m a UFC fighter. I’m here at a very big show in Las Vegas. Lot of people here. Lot of women here. Lot of kids here."

The fighters never got the chance to settle their differences in the Octagon but they could yet meet if Diaz sticks around after his mooted fight against Dustin Poirier at UFC 230. In an interview with TMZ, Diaz claimed, "Khabib is scared for his life." 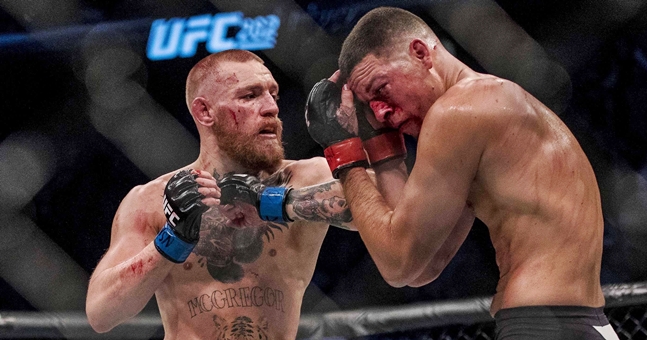 As for a fight prediction, Diaz responded:

"I slapped the sh*t out of both of 'em... I hope it's a double knock-out... neither one deserves to be champ."

END_OF_DOCUMENT_TOKEN_TO_BE_REPLACED

The Stockton native believes McGregor has the better fight style of the UFC 229 headliners but noted that Nurmagomedov has 'fought nobody' and 'fights like a scared little bitch' on the ground. He believes McGregor will win but will be happy if they both, somehow, lose.

As for that third fight against 'The Notorious', Diaz opined:

"I ain't fighting no trilogy. He already got his ass whipped. He can fight everybody else. I got shit to do too."

That's the trilogy fight sorted so...