That was the take of UFC president Dana White when he was asked about a possible 170lb fight between Jorge Masvidal and Conor McGregor.

Masvidal sparked Ben Askren in five seconds in his last outing at welterweight, earlier this month, and is hoping to get a title shot against Kamaru Usman ahead of Colby Covington and former champ Tyron Woodley.

END_OF_DOCUMENT_TOKEN_TO_BE_REPLACED

The only hitch in Masvidal's plan is a major one - Usman is currently out injured and may not feature again until later this year, for his first title defence. It was suggested to him that he could take on McGregor, while he waits, and he would certainly be down for it, even if he did try to warn 'The Notorious' off the idea. He declared:

"I want McGregor, man. I want to break his face. I think that's an easy pay-cheque. He's got these cash symbols written all over his face for me."

McGregor confirmed, on social media, as recently as Sunday that he was intent on a UFC comeback. He last fought in October 2018 - losing to Khabib Nurmagomedov - and hand surgery ruled out return bout against Anthony Pettis this month. It may not be November, at Madison Square Garden, before he steps back in The Octagon. 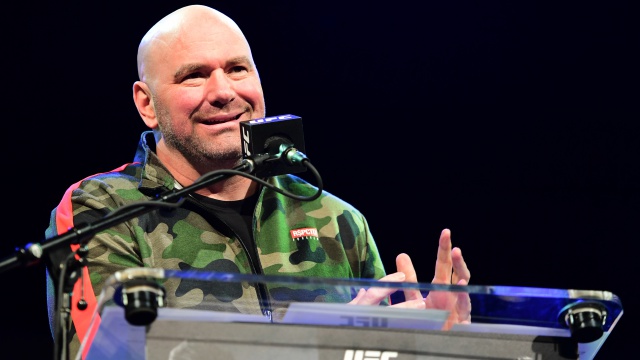 UFC President Dana White speaks during the press conference at the Music Hall of Williamsburg in January 17. (Photo by Sarah Stier/Getty Images)

White was asked about a possible McGregor vs. Masvidal bout, by TMZ, and his response was emphatic:

McGregor has two welterweight fights in his professional MMA career, both in the UFC and both back in 2016. He lost to Nate Diaz at UFC 196 but avenged that result at UFC 202, five months later.

END_OF_DOCUMENT_TOKEN_TO_BE_REPLACED

Meanwhile, the UFC has confirmed what will be the most anticipated fight of 2019. The promotion will pair off Justin Gaethje and Donald Cerrone in September.

Gaethje [20-2] and Cerrone [30-12-1] should headline a UFC Fight Night card in Vancouver, Canada on September 12. McGregor has been linked to both lightweights in recent months and both are dangerous strikers who often prefer to stand up and throw.

Cerrone's doctor stoppage loss to Tony Ferguson was the fight most fans were looking forward to in 2019 and that may well be surpassed when a tilt with the reckless and lethal Gaethje is confirmed. Between them, both men have 27 knockouts or TKOs to their name.

An impressive win for either man could get McGregor's attention or put them close to a fight with Nurmagomedov.


popular
Predicting the 31 biggest knock-out championship games around Ireland this weekend
Shane Lowry on his Tuesday duels with Rory McIlroy at The Bear's Club
QUIZ: Can you name the sponsors of all 32 of these old county jerseys?
Roy Keane linked with Championship job to replace ex-teammate
Two Man United players led a furious half-time inquest into Manchester derby performance
"I think Wexford football is in trouble if something is not changed" - Banville criticises Wexford lay-out
"This is the darkest day for English rugby... the ship has sunk" - End of the road for Worcester Warriors
You may also like
3 weeks ago
Hasbulla signs five year deal with UFC 'worth more than many fighters'
3 weeks ago
Nate Diaz and Tony Ferguson tossed together for UFC 279 main event after wild 24 hours
1 month ago
Your guide to a huge weekend of sport and how to watch it all
2 months ago
Paddy Pimblett leaves O2 Arena in tears after dedicating victory to friend that died by suicide
2 months ago
Conor McGregor 'offered' blockbuster UFC title shot in January
3 months ago
Ian Garry makes American opponent rue pre-fight comments at UFC 276
Next Page