A weight class has never seen a shake-up as rapid as this.

Three weeks ago, Conor McGregor was the undisputed UFC featherweight champion and Jose Aldo was the interim champ, doggedly barking for a rematch.

But tonight, as we look at the UFC's 145lbs rankings, there is no sign of 'The Notorious' and Aldo is the man who holds the official title at featherweight while he has his own pursuer.

END_OF_DOCUMENT_TOKEN_TO_BE_REPLACED

Max Holloway touched UFC gold for the first time in his young career when he outgunned Anthony Pettis in the main event of UFC 206 and he knows exactly who he wants next and where he wants it to go down.

Shortly after the streaking Hawaiian got his hand raised for the tenth fight running, Holloway issued an unambiguous call-out of the former longtime and recently reinstated featherweight champion Jose Aldo.

END_OF_DOCUMENT_TOKEN_TO_BE_REPLACED

"We couldn't fight Aldo so I started calling him Jose Waldo," Holloway said in his post-fight interview.

"Hashtag Jose Waldo and tell him meet me in Brooklyn in February."

Holloway didn't even give himself a moment to enjoy his stunning victory before he set about talking up a unification bout with the Brazilian at UFC 208.

But to ignore the 25-year-old's performance in the Octagon would do him a disservice as he looked at his best while he systematically dismantled a former UFC champion.

END_OF_DOCUMENT_TOKEN_TO_BE_REPLACED

The opening round saw Holloway stick to his usual strategy of striking on the outside, so as to utilise his reach advantage, but that also opened up space with which Pettis could use his trademark creativity.

But Holloway found his timing and range in the second half of the first stanza as he countered with a right hand over the top and a left hook, while also denying his opponent a takedown late on. 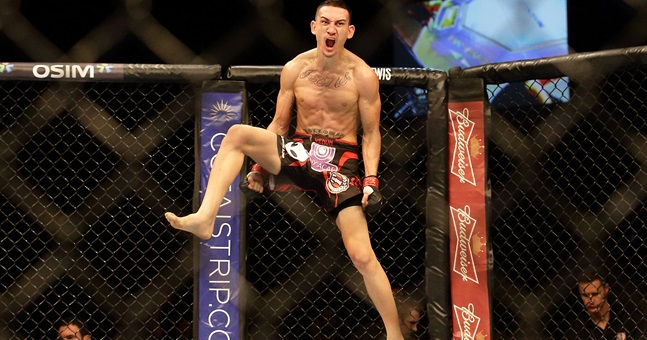 In between rounds, former UFC lightweight champion Pettis announced he had broken his hand and it was all downhill from there.

Holloway looked noticeably more comfortable in the seconds that followed Yves Lavigne's instructions for both fighters to engage at the start of the second and he dropped Pettis with a counter right but, rather than dive into Pettis' guard, Holloway ordered 'Showtime' back to his feet.

Pettis looked absolutely desperate with his shot in the dying moments of round two but Holloway refused to allow his opponent clasp his hands around his hips and kept his soles firmly on the mat.

Pettis started to work behind his jab due to what he understood to be a broken right hand before Holloway proved himself much more than a counter striker as he tossed Pettis to the ground with ease.

The third frame was the final one as a Holloway body kick and right hand backed Pettis up and forced him to shield his face but 'Blessed' managed to hit every unguarded piece of flesh as he winded up and uncorked shots to the temples and body.

The official saw enough as 'Showtime' crumpled to the mat and Holloway's hand was raised as the new UFC interim featherweight champion.

#ANDNEW interim featherweight champion of the world... @BlessedMMA! What a performance. 🏆 #UFC206 https://t.co/0lk9ChF2i2

And here's how his fellow fighters saw the result...

Was the body kick!

#UFC206 you delivered in a big way! Holloway looked fantastic!

Great finish by @BlessedMMA! Made it look easy #ufc

Hate seeing friends lose but @Showtimepettis is a champ and will come back stronger.

Max is an excellent fighter. Shows you can be in a striking battle & don't need to be all bloody/bruised after. Clean performance. #UFC206