If you're not one of those people, what the hell are you doing reading this? Here, try one of our quizzes instead. Those of you who are even a little bit curious can soldier on.

There is a little bit of a custody battle going on among Premier League supporters right now over UFC superstar Conor McGregor. The reason being is that 'the Notorious' is on record claiming to have supported both Liverpool and Manchester United.

END_OF_DOCUMENT_TOKEN_TO_BE_REPLACED

Liverpool fans are pointing towards a video of McGregor that has been doing the rounds on social media of late. In the clip, McGregor tells a group of fans, 'Fuck Everton! I'm a Red."

Proof doesn't get more definitive than that, right?

Well, that's not necessarily the case.

A lot of Liverpool fan accounts seem to think that McGregor dropping that snappy line signifies that he definitely supports their club, but he has also said the same of Manchester United.

In his old column for Independent.ie, McGregor admitted that he wasn't really much of a football watcher, although he was hugely into the beautiful game as a kid. Back then, he confessed, he was a Manchester United fan.

"I was big into football as a kid, but more as a player than a watcher.  I suppose if you pushed me I would say Manchester United, but that’s only because it gets passed down from generation to generation.  I think just about everyone in Ireland is either a Liverpool or United fan." 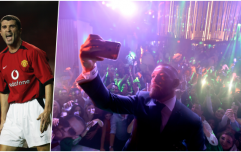 END_OF_DOCUMENT_TOKEN_TO_BE_REPLACED

That would explain this photo then.

So there are a few possibilities. Either McGregor has switched allegiances from United to Liverpool, he was lying to those Liverpool fans or, perhaps what's most likely, is that he doesn't really support a football team at all.