Khabib's manager: If I see Conor McGregor again I'm going to smack him

Khabib Nurmagomedov's manager Ali Abdelaziz has said that he will smack Conor McGregor the next time he sees him.

McGregor repeatedly called Abdelaziz a 'mad terrorist rat' during the build up to UFC 229 last month where Nurmagomedov submitted McGregor to retain his UFC Lightweight belt.

The Dubliner sounded off at Abdelaziz at the pre-fight press conference in New York and targeted his estranged son Noah.

The Dominance management CEO said that the fight with McGregor was personal and that he intends to get physical with the former champion should he cross paths with him again.

"He's calling people a 'muslim rat' and I denied it, of course I denied it, but guess what? He said this on Instagram and Twitter throughout the week.

"He's one motherfucker - that if I see him - I promise you - I'm going to smack him. Conor McGregor is a world champion, he's the double champ, everybody's sucking his blood but it's not him.

"Now the world has changed. You see Khabib going to meet the president Erdogan [Turkish president Tayyip Erdogan]. He's going to Abu Dhabi to meet all these great sheiks, he's going to Morocco to meet the king of Morocco and you got a guy driving a truck selling liquors."

END_OF_DOCUMENT_TOKEN_TO_BE_REPLACED

Abdelaziz added last month that the post-fight brawl that ensued after Nurmagomedov's win over McGregor at UFC 229 was not their ideal way to celebrate the win, but that it was part of the fight game and an apparent result of McGregor's pre-fight goading. 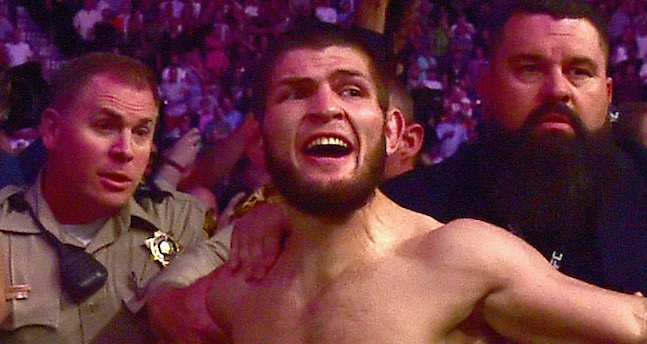 "I want to congratulate my brother @khabib_nurmagomedov The undisputed, undefeated pound for pound king. There was never 2 Kings from beginning, only one king.

"This is not the way we want to celebrate such a dominant performance but when you talk about people’s country, family and religion and intentionally try to kill someone like he said and the cornermen running their mouths after, this is the fight game & shit happens.

"The fans got an amazing fight and a great show. I want apologize to the Nevada athletic commission, the governer of Nevada and I want to thank Las Vegas police department and security for doing such an unbelievable job. Now everyone understands who’s the amateur here."