Through a mix of injuries, weight cut misses, injuries and misplaced video cables in dark TV studios, Nurmagomedov and Ferguson have never been locked into The Octagon.

END_OF_DOCUMENT_TOKEN_TO_BE_REPLACED

Despite being two of the finest lightweights in the promotion for the past decade, fans have been denied the chance to final settle who has the best style and the best game to be top dog.

All that is (hopefully) set to chance next April and we want you all crossing your fingers and toes as this UFC title fight gets closers and closer. Multiple outlets - sparked by an initial ESPN story - are reporting that the UFC have slated in Nurmagomedov vs. Ferguson for April 18 in Brooklyn.

This is the fight that MMA fans have been craving for years - the undefeated UFC lightweight champion Nurmagomedov [28-0] going up against the clear No.1 contender of the 155lbs division. Ferguson is on a 12-fight winning streak in the division and has scalped the likes of Donald Cerrone, Anthony Pettis, Kevin Lee and Rafael Dos Anjos in recent years. 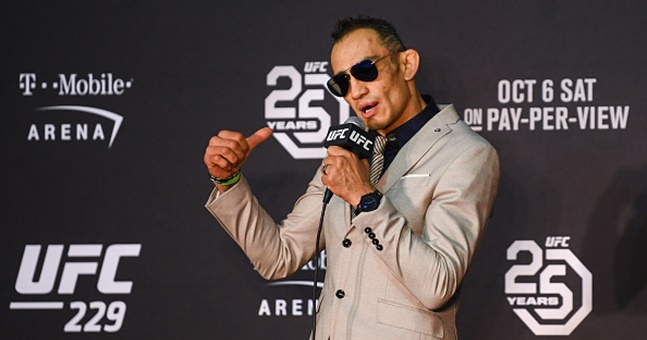 END_OF_DOCUMENT_TOKEN_TO_BE_REPLACED

One of the most interesting aspects of this title fight is that it will take place at the same venue where, in April 2018, Nurmagomedov claimed 155lbs gold for the first time. From the moment 'The Eagle' and fellow challenger Al Iaquinta made weight - and the fight at The Barclays Center was on - Conor McGregor was stripped of the lightweight title he had won in November 2016.

Nurmagomedov was a unanimous points winner on the night and has since defended his belt by beating McGregor and, earlier this year, Dustin Poirier.

The Barclays Cemter was also the scene of the infamous attack on Nurmagomedov's bus - after a UFC 223 media day - that was carried out by McGregor and his SBG teammate Cian Cowley.

Credit: Anatomy of a Fighter

END_OF_DOCUMENT_TOKEN_TO_BE_REPLACED

'The Notorious' used a hand trolley to smash the window of a bus carrying Nurmagomedov, Mike Chiesa, Rose Namajunas, Ray Borg and several others. He was later charged for the incident, apologised and was hit with a public order offence.

McGregor will be hoping to push himself into that No.1 contender picture, in January, with a comeback fight in the UFC. He is set to face Donald Cerrone in Las Vegas but Justin Gaethje has been another fighter linked to the bout.


popular
Roy Keane flatly rejects longstanding perception of ex-Man United midfielder Paul Ince
Sean Dyche set to be named Everton manager after Marcelo Bielsa talks break down
Allianz National Football League Round 1: All the action and talking points
Conor McGregor hit by car ‘at full speed’ while cycling
Roy Keane leaves ITV pundits in stitches after Pep Guardiola's pre-match interview
Quiz: Identify these 15 football clubs that are not named after a place
"I don't like to fill my time that way" - O'Hora going his own way in an era of obsessives and covering all bases
You may also like
1 month ago
Ariel Helwani shares Paddy Pimblett WhatsApp messages as spat becomes public
1 month ago
Conor McGregor savagely hits back at Joe Rogan following PED comments
2 months ago
"There’s a new Irish superstar in town" - Young Derry fighter touted for UFC after big title win
2 months ago
Conor McGregor almost unrecognisable after shaving off iconic beard
3 months ago
Dana White confirms Conor McGregor is not in the USADA testing pool
4 months ago
Hasbulla signs five year deal with UFC 'worth more than many fighters'
Next Page