Khabib Nurmagomedov sparks outrage with comments on women in MMA

UFC Lightweight champion Khabib Nurmagomedov has said that women should do their fighting at home.

Nurmagomedov was asked on stage about what advice he would have for female fighters looking to make a career in mixed martial arts and he said that 'women should do their fighting in the home' before adding that they should 'finish their husband all the time'.

It's not the first time Nurmagomedov has landed himself in hot water after he was previously filmed paying a homeless man money to do push ups in the street.

END_OF_DOCUMENT_TOKEN_TO_BE_REPLACED

Khabib can be heard laughing in the background as the man completes the task and gets back to his feet.

Nurmagomedov continues to laugh as another man, who is tagged in the story as his cousin, Abubakar Nurmagomedov, interacts with the homeless man.

Abubakar then jokingly gets into a fight stance as the man gestures towards him.

The Dagestani fighter is also set to sit before the Nevada State Athletic Commission on Monday for a disciplinary hearing following his post-fight melee at UFC 229 where he scaled the fence of the Octagon to attack Conor McGregor's teammates.

END_OF_DOCUMENT_TOKEN_TO_BE_REPLACED

McGregor is also scheduled to be at the hearing however he has requested a continuance in his pending case.

The commission granted McGregor's request, meaning he will not be in Las Vegas next Monday nor will his case regarding his role in the UFC 229 post-fight brawl be discussed at the scheduled hearing. 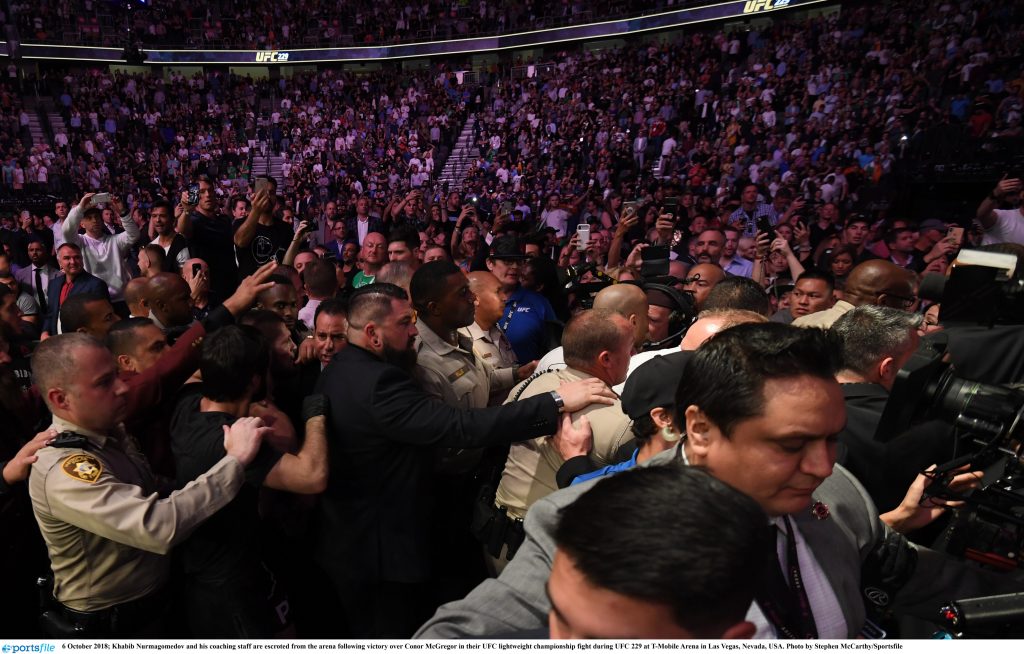 report that McGregor will have to wait a little while longer before discovering how he will be punished for attempting to punch a member of Khabib Nurmagomedov's team after the 155lbs title fight in October.

Nurmagomedov, who has yet to be paid half of his purse for UFC 229 after jumping out of the Octagon to confront Dillon Danis among others, is also not expected to be in Las Vegas for next week's hearing but a continuance for the 30-year-old has yet to be confirmed.


popular
World Cup 2022 Day 10: All the major action and talking points
Iran demand action by FIFA after USA team change flag on social media
Thibaut Courtois warns teammates after leaks emerge from Belgium camp
"I can absolutely say that I have never enjoyed a job more" - McKaigue revelling in new role as Slaughtneil GPO
Roy Keane's issue with Argentina star could rival Graeme Souness and Paul Pogba
"I have equal love for football and hurling" - Sheehy set for two Leinster finals in two hours
"I appreciate Moycullen now more than ever" - Cooke's American lifestyle from a Moycullen base
You may also like
2 months ago
Hasbulla signs five year deal with UFC 'worth more than many fighters'
2 months ago
UFC fighter Elias Theodorou has died, aged just 34
2 months ago
John Kavanagh and Johnny Walker kicked out of T-Mobile Arena during UFC 279 main card
2 months ago
Conor McGregor took exception to one part of Nate Diaz victory speech
2 months ago
Nate Diaz and Tony Ferguson tossed together for UFC 279 main event after wild 24 hours
3 months ago
Your guide to a huge weekend of sport and how to watch it all
Next Page