Last weekend, when Khabib Nurmagomedov met up with Dana White in Abu Dhabi, they discussed the upcoming UFC 257 main event between Conor McGregor and Dustin Poirier.

Assessing how the fight would play out, Nurmagomedov was on the money with his prediction.

END_OF_DOCUMENT_TOKEN_TO_BE_REPLACED

It remains unclear as to whether 'The Eagle' will return to the UFC, after he vacated his lightweight belt and lay his gloves in The Octagon last October. The passing of his father, Abdulnap, forced Nurmagomedov to re-think his priorities and he says a promise was made to his mother that he would not fight again. 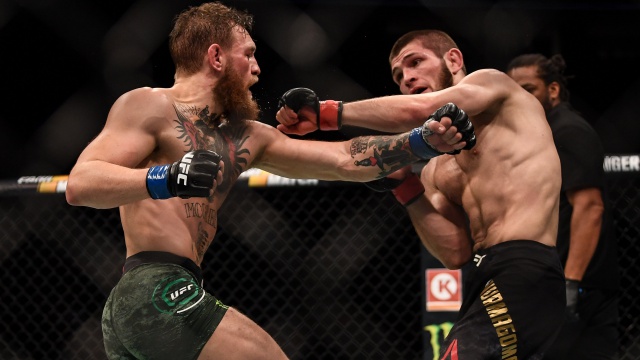 Conor McGregor in action against Khabib Nurmagomedov during UFC 229 in October 2018. (Photo by Stephen McCarthy/Sportsfile)
Advertisement

That has not stopped White from trying. The UFC president met with Nurmagomedov last week and sought to entice him back to the promotion. For all his vaguely positive words about a return, White admitted after UFC 257 that the division may need to crown a new champion later this year.

After announcing that Dustin Poirier was one of the Performance of the Night (and $50,000 bonus) recipients, for his second round knock-out of McGregor, White spoke about that Nurmagomedov prediction:

"Khabib, when I was with him last week, said Dustin needs to come out in that first round and he needs to try grapple, and not strike, with Conor. Tire him out, make him use his arms and legs.

END_OF_DOCUMENT_TOKEN_TO_BE_REPLACED

What Nurmagomedov spoke of was essentially the Poirier game-plan, to the letter. The American traded a few strikes with McGregor in the first round before surprising him with a take-down that saw both men tied up by the fence more much of the first round. There would be no McGregor knock-out inside 60 seconds, as he had predicted, and the grappling and leg kicks had slowed down 'The Notorious'.

The finish from Poirier, when it came, was mid-way through the second round as McGregor was hobbling around from the punishing leg kicks. Poirier unloaded on his prey and when referee Herb Dean stepped in to end the fight, it read 2:29 to go in the second round. He got McGregor past a round and a half and finished the job.

END_OF_DOCUMENT_TOKEN_TO_BE_REPLACED

Nurmagomedov, watching on, had called it right. He was also quick to fire up a post-fight reaction on Twitter.

For other fighters out there, the likes of Nurmagomedov and Poirier are delivering a template to defeat the Dubliner. Wear him out, take him down and get through that first round. After that, go to work.

Only the elite can carry out such a plan, as McGregor remains a top level striker, but the aura about him is fading.