Khabib Nurmagomedov may lose some fans over this video.

Undisputed UFC lightweight champion Khabib Nurmagomedov has landed himself in hot water over a video he uploaded to his Instagram story.

The footage opens with a homeless man finishing up a set of pushups on the street. Khabib can be heard laughing in the background as the man completes the task and gets back to his feet. Khabib continues to laugh as another man, who is tagged in the story as his cousin, Abubakar Nurmagomedov, interacts with the homeless man. Abubakar jokingly gets into a fight stance as the man gestures towards him.

In the next clip, Abubakar is shown handing the homeless man some money. Khabib can be heard giggling as the note changes hands. The homeless man bows to Abubakar, who extends his arm for a handshake just as the clip ends.

It then cuts to another man doing pushups as Abubakar watches over. Khabib is still laughing as he shoots the clip.

Although the videos are no longer on his Instagram story, you can see them in the tweet embedded below.

What are your thoughts on this video posted by Khabib of him and his cousin paying homeless people to do press ups for money... 🤔

Personally we feel it's disgusting and degrading.. Especially them constantly laughing at those involved.. 😡 pic.twitter.com/msE5i9ureE 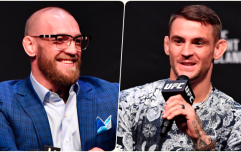 END_OF_DOCUMENT_TOKEN_TO_BE_REPLACED

Nurmagomedov is scheduled to defend his title against Conor McGregor at UFC 229 in Las Vegas' T-Mobile Arena on October 6. It will mark the undefeated Dagestani's first defence of the belt. McGregor returns to the Octagon after nearly a two-year absence to try to reclaim the title he was stripped of.

The event is expected to smash UFC PPV records.


popular
"Twas often I felt like firing a boot at him' - Micko's words of consolation didn't go down well in Cork
"I couldn’t speak, but Rhys could see that something serious was going on"
Springbok star Eben Etzebeth's lockdown workout would break most of us
Endearing Keith Earls story proves he will never forget his roots
Eric Cantona confirms famous Roy Keane story about him
Why Jude Bellingham wears the No. 22 jersey
Cabrera and Woods miss their Champions Dinner as biggest week in golf kicks off
You may also like
2 weeks ago
Dejan Lovren lasts entire minute in cage fight with UFC legend Mirko Cro Crop
2 weeks ago
From homelessness to the brink of securing a contract with the UFC
3 weeks ago
UFC announce lightweight title fight after Khabib officially retires
1 month ago
"I'm sorry" - New bantamweight champ in tears as UFC history is made
1 month ago
Conor McGregor bought out of Proper 12 whiskey company
1 month ago
Dana White has settled on a contentious next fight for Conor McGregor
Next Page