"Logically, he is next."

Justin Gaethje is currently in limbo after missing out on the Conor McGregor fight but he could yet have a title shot before the year is out.

'The Highlight Reel' arrived into the UFC in 2017 after four years of dominance and a long lightweight champion stint in World Series of Fighting. He beat the wily Michael Johnson on his UFC debut but lost his next two outings against Eddie Alvarez and Dustin Poirier.

END_OF_DOCUMENT_TOKEN_TO_BE_REPLACED

Some began to doubt whether he was cut out for the UFC or whether he needed to adjust his stand and bang tactics to survive at the top end of the fight game. Gaethje make some training tweaks but remained true to himself and, in the past 18 months, bounced back with three wins over James Vick (KO), Edson Barboza (KO) and Donald Cerrone (TKO). 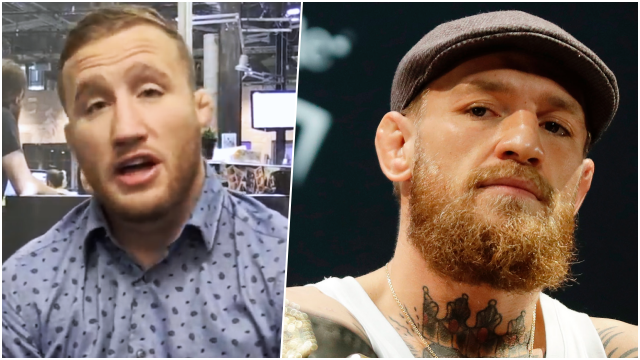 Gaethje would have felt that his win over Cerrone would have made the clamour for a McGregor fight undeniable but he is currently without a fight to train for as 'Cowboy' and 'The Notorious' head towards a UFC 246 headliner in two weeks' time.

All may not be lost, however, according to both McGregor and Ali Abdelaziz, who manages reigning lightweight champion Khabib Nurmagomedov.

END_OF_DOCUMENT_TOKEN_TO_BE_REPLACED

"Maybe I'll get through Donald and I'll have a quick turnaround against Justin," McGregor told The Mac Life. "Justin is on the list, no doubt."

Abdelaziz has also been speaking about the 31-year-old Gaethje and believes he would be deserving of the next shot at Nurmagomedov, if that was the way the UFC wanted to go after his April title defence against Tony Ferguson. He told TMZ:

"He’s been winning and knocking people out. Logically, he is [next]. He’s ranked No. 3. No. 2, Dustin Poirier, fought for the title. That’s the only fight that makes sense for him, for his career, to fight the champion."

Gaethje is angling to get on the main card for UFC 249 and wants a top opponent at the April pay-per-view to take the co-main event slot. One man that sounds up for that prospect is former interim lightweight champion Poirier, who has a previous KO win over him:

END_OF_DOCUMENT_TOKEN_TO_BE_REPLACED

Were Gaethje to get his fourth win on the trot - particularly if he avenges that loss to Poirier - it could be enough to move him up into undoubted No.1 contender for that 155 lbs strap.

As for the possibility of 'The Eagle' having a 2020 rematch with McGregor for the lightweight belt, Abdelaziz claims Dana White is only talking up the prospect to add some weight to the Dubliner's latest UFC comeback.

"Conor’s not on our radar," he declared. "He might lose to Cowboy, as far as I understand. I think he might lose."

In a final dig at McGregor, Abdelaziz remarked that 'the UFC made the right choice' to keep him away from Gaethje as the American is renowned for taking opponents into deep waters. "Gaethje would have beat his ass," he proclaimed. "Simple."