Daniel Cormier needed to be at his best to slip out of this one.

The former UFC light heavyweight and heavyweight champion provoked the ire of his American Kickboxing Academy teammate Khabib Nurmagomedov for a TV piece in which he praised Conor McGregor.

McGregor and Nurmagomedov went from being respectful of each others' abilities to all out war, in 2017 and 2018. It started off with 'fake champion' and 'chicken' and sunk to the bottom with bus attacks, family members being insulted and a post-fight brawl at UFC 229. 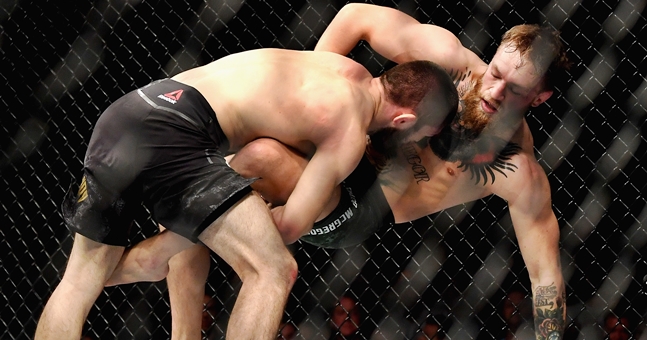 END_OF_DOCUMENT_TOKEN_TO_BE_REPLACED

McGregor and Nurmagomedov may yet meet for the rematch of the 2018 fight won by 'The Eagle', however it could be a while away yet. McGregor is returning to the UFC in January to fight Donald Cerrone, at welterweight, while Nurmagomedov is defending his 155lbs belt against Tony Ferguson in April.

Looking ahead to both fights, in his role as ESPN pundit, Cormier had some kind words to say about McGregor in a recent interview, and his AMA teammate took exception to that. As Cormier was getting gloves strapped on for a sparring session, 'The Eagle' approached him to vent his frustrations.

NURMAGOMEDOV: "You can't say his name."

NURMAGOMEDOV: "He doesn't deserve you to say his name."

At this point, Nurmagomedov storms off but Cormier, in playful form and not willing to let it drop, pursues.

"He has 27 million Instagram followers. More?! He's got more than 27? This guy killed Alvarez, huh. So, let me ask you a question - Even though you don't like this guy, you respect that this guy does some good things?"

END_OF_DOCUMENT_TOKEN_TO_BE_REPLACED

At that, Nurmagomedov shakes his head. No.

Cormier changes tack and speaks about the elite striking from McGregor that put Eddie Alvarez away, to make McGregor a double UFC champion [featherweight and lightweight] in 2016.

He then praises the Dagestani's wrestling ability as being on a whole other level and something even McGregor could not live with. Ending their back-and-forth with smiles and a fist bump, Cormier turns back to his trainer and says, "I got him back; he's back on my side! All you got to do is love Khabib and he comes back, reel him back in!"

Never get tired of these two together 😂@TeamKhabib had issues with @dc_mma analyzing "this guy" on his ESPN+ show Detail (via @i_AmTheBay, h/t Crazyplan9/Reddit) pic.twitter.com/8OpA0PINJg

All well that ends well, but you get a real sense that the bad blood is still simmering.

Wins for both fighters in the first four months of 2020 could well put them on a collision course for late next year.