The video in which Khabib's cousin Abubakar Nurmagomedov showed off the wounds he suffered at the hands of Conor McGregor after attacking him following the UFC 229 main event has now been translated.

It turns out he has offered a pretty feeble excuse for by he came off the worse in the altercation with McGregor.

He is claiming that the reason he was bested by the Irish fighter was that he was holding his "papakha" headpiece in his left hand. 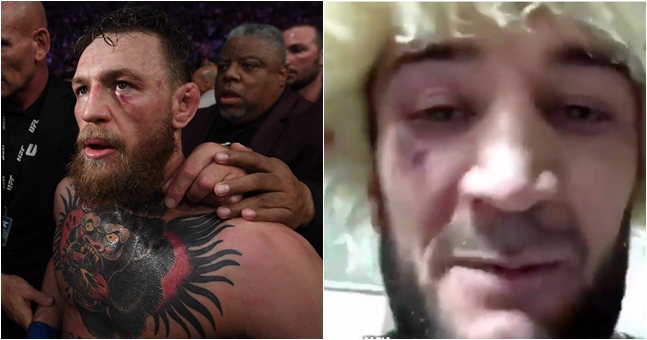 That is quite a welt. Conor McGregor looked to be in pursuit of Khabib Nurmagomedov moments after...

END_OF_DOCUMENT_TOKEN_TO_BE_REPLACED

The younger Nurmagomedov, who is also an MMA fighter, explained how the incident came about and according to his version of events it was McGregor who threw the first punch and he then retaliated.

“In short, I climbed onto the cage. This Irish bastard hit me. But I didn’t hold back either. Bam, boom! – I gave [him] two,” Abubakar, says in the video his native language. Adding:

"The papakha prevented [me], there was a papakha in my left hand.”

McGregor, Nurmagomedov and three of his team were escorted away by security guards and police officers following the incident, although no prosecution are likely to happen as McGregor has declined to press charges.

END_OF_DOCUMENT_TOKEN_TO_BE_REPLACED

Whilst the McGregor confrontation was going on, Khabib threw himself into the crowd to make a break for Dillon Danis who was "talking shit" to him.

Following the incident, UFC president Dana White has said that Khabib could be stripped of his belt and bans handed to anyone involved in the altercations.