The next time we see Jose Aldo inside the Octagon, he could be a lightweight.

The one and only time Jose Aldo fought at lightweight, it didn't go so well for him. In November 2005, 'Scarface' fought Luciano Azevedo in Jungle Fight's 155 lb division. The man who would go on to be the consensus greatest featherweight of all time was soundly beaten via second-round rear-naked choke.

However, that was before Jose Aldo was Jose Aldo. 2018 could be the perfect year for the Brazilian to return to 155 lbs. As long as Max Holloway holds the featherweight belt, there is very little reason for him to remain in the division. 'Blessed' has already knocked out Aldo in back-to-back title fights. Although considering Holloway's recent health issues, the Hawaiian's time at the top of the 145 lb pile could be coming to an end.

Should Holloway return to featherweight healthily, which we're all hoping he does, and successfully defend his belt against Brian Ortega, Aldo will likely move up a division. That may not be the worst idea. Aside from the fresh start, it will make the cut that little bit easier. 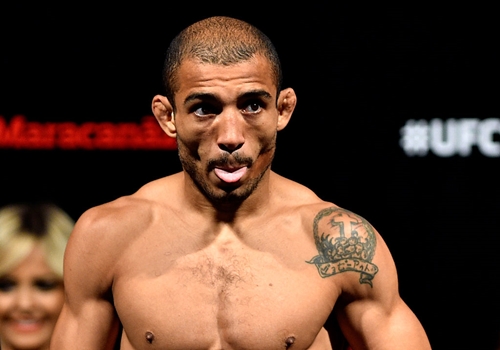 Aldo told reporters in Brazil (translated by MMA Fighting) that he will only stay at featherweight for one fight. He still has eyes for his old belt. Fighting anyone below him in the rankings doesn't make sense to Aldo. So he wants to fight Brian Ortega next should T-City win the belt. Regardless of the opponent, he wants to compete on the UFC 231 card on December 8 which takes place in Toronto, the same city in which Aldo made his promotional debut.

"To me, I don’t care if it’s at featherweight or lightweight, what matters is fighting at that card. I had already asked for it before that fight was booked, so for me it’s great because we know that if anything happens, we can fight for the belt, so I will get ready. No matter the weight, 145 or 155, I’ve earned a title."

END_OF_DOCUMENT_TOKEN_TO_BE_REPLACED

Aldo also revealed he was offered a lightweight bout against fan-favourite Donald Cerrone at UFC Sao Paulo on Septemeber 25. When Glover Teixeira pulled out of the main event against Jimi Manuwa, the UFC wanted Aldo to fill the headline slot. However, the timing wasn't right and instead, Thiago Santos will fight 'the Poster Boy' at the top of the bill.

"They also asked me to fight in Sao Paulo, but there was not enough time to get it done at lightweight. They even put me to fight Cerrone, but it wasn’t done. I’m waiting for ‘Dede’ now, talking to him, and when he finds a good name and they agree to it, we’ll fight."

"Exactly, the UFC offered. When Glover pulled out and they had no main event, they asked if there was a possibility for me to fight. We accepted, depending on the opponent, and they offered Cerrone right after, and he had already agreed, and ‘Dede’ didn’t think it would be good because there wasn’t enough time. We needed some time to rest before we started another camp again, so it didn’t happen. But now we’re waiting for ‘Dede’ to talk to them again so we know who we’re fighting."

Cerrone has since been booked to fight Mike Perry at welterweight. For now, Aldo remains fightless.