Ask Urijah Faber what the worst part about fighting Jose Aldo is and he'll probably single out one thing.

Jose Aldo's leg kicks are perhaps the most vaunted in all of MMA. When the former UFC/WEC champion's shin connects, it usually leaves its mark.

END_OF_DOCUMENT_TOKEN_TO_BE_REPLACED

During his nine-plus years of domination in the 145 lb division, 'Scarface' utilised this tool against everyone he faced. Faber needed crutches to support his purple thighs after he fought Aldo the first time, at WEC 48 in 2010.

The first time Frankie Edgar fought him, Aldo chopped him down a couple of times like a lumberjack would a tree. 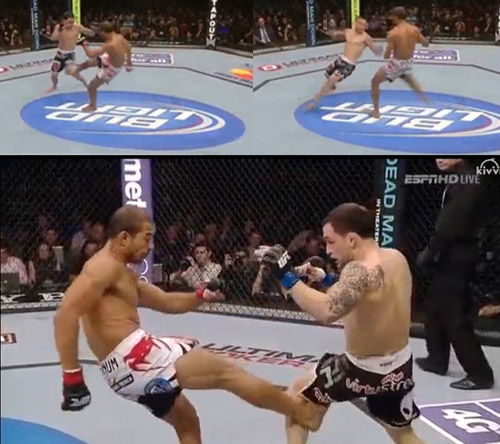 Yet, we didn't see many leg kicks for the sequel bout against 'The Answer' at UFC 200. They were also a notable absentee during the recent title unification bout loss to Max Holloway at UFC 212. Nova Uniao head coach Andre Pederneiras revealed to Fox Fight Club (via MMA Fighting) that Aldo was hurt heading into the fight.

“Many people asked why he didn’t kicked. Aldo has a leg injury, so he couldn’t throw kicks or run during his entire camp."

“That doesn’t take anything away from Max Holloway’s win, we don’t want to say that. It was even funny because we would go back (outside the Octagon) between rounds the crowd said ‘tell him to kick,’ but we, the cornermen, were the only aware of it. We avoided the kicks because of this injury. We were afraid it would strain his muscle.”

Pederneiras also shed some light on why Aldo is reluctant to take fights on short notice. He explained that Aldo's refusal to accept bouts on less than three months' notice is because of a neck injury, which the UFC are aware of.


popular
Barcelona allowed to register four new signings, but Jules Kounde misses out
"He can add something to our attacking line up" - Jamie Clarke signs for Northern Irish soccer club
Erling Haaland registers strange statistic on home debut as Mark Travers keeps the City score down
Angry Frenkie de Jong 'tells Barcelona teammates he could join Man United'
Ranking the best county GAA songs of all-time (32-1)
Antonio Conte 'banishes' four Tottenham players from first-team
"It was unfair on the Galway backs” - Tomás Ó Sé admits that Kerry benefitted from unfair rule
You may also like
1 month ago
Jorge Masvidal speaks about defending BMF title against Conor McGregor
2 months ago
Dana White reveals who Conor McGregor could fight on UFC return
2 months ago
Your guide to a great weekend of sport and how to stream it all
2 months ago
Conor McGregor says he knows his next UFC opponent and fight date
3 months ago
Commentating cage-side, Daniel Cormier missed the UFC knock-out of the year
3 months ago
Conor McGregor responds to Michael Chandler's callout after UFC 274
Next Page