John Kavanagh shows he's so much more than just a coach

"Have you talked to John? He's one of the smartest people you're ever going to meet" - SBG fighter Kiefer Crosbie told me last summer before his win over Waldemar Cichy.

I hadn't talked to Kavanagh before. I had asked him a few questions at one or two press conferences but I had yet to sit down and have an actual conversation with him, but I had spoke to a number of people about him.

I'd talked to James Gallagher about how Kavanagh had taken him into his home as a 15-year-old after he had left school.

END_OF_DOCUMENT_TOKEN_TO_BE_REPLACED

I'd talked to Sinead Kavanagh about how he'd convinced her to consider training in mixed martial arts long after she had left boxing jaded and disillusioned with the sport.

I'd talked to Crosbie about how he communicates his messages to his fighters and how he's able to change the mindset of those that he trains.

And then I finally sat down in his office one day and talked to him, and what I found was one of the most interesting coaches I had ever come across in any sport.

I was there to talk to the SBG head coach about one of Kavanagh's upcoming fights and we ended up talking about discovering your passion, how that passion is not actually your passion unless you're willing to start doing it for free, the common traits that elite athletes share and how a conversation with Cristiano Ronaldo had convinced him to watch more Real Madrid games.

END_OF_DOCUMENT_TOKEN_TO_BE_REPLACED

Crosbie was right, Kavanagh was smart, but he was also principled too. He always has been.

He started training and coaching in MMA after he was unable to walk away from witnessing an attack as an 18-yer-old in Rathmines, Co. Dublin.

“We were with a crowd but we were left behind. We were walking down Rathmines and I saw a guy getting a bit of a pasting," said Kavanagh on The Late Late Show.

END_OF_DOCUMENT_TOKEN_TO_BE_REPLACED

"We walked past him initially and then I stopped and said ‘I can’t do this’ and I went back.

“Now, what would have been sensible would have been to just go into the garda station which was only across the road, but I wasn’t thinking that straight and I jumped in.

"Unfortunately, it didn’t end like the martial arts movies where you drop three or four guys and you walk off into the sunset. I was the one that got dropped.

“Thankfully the guy got up and he ran, which was the natural instinct, I wouldn’t have held that against him."

McGregor dropped Daly with a shot to the body in sparring and Kavanagh had seen enough there and then before intervening.

"I got a little emotional because Ash had been with me a long time and the other guys would look after her," Kavanagh told Paul Kimmage of the Sunday Independent.

"But this new guy had come in and put her down, and my protective nature kicked in.

"I was still fighting at that stage so I held him down and beat the s**t out of him.

"I kept hitting him in the body until he couldn't breathe and then I looked at him [and said]: 'What's it going to be? We can train or we can fight?' And he was fine the next day."

He wasn't happy with McGregor's attitude and he certainly wasn't happy when Reebok, the official apparel provider of the UFC, released two separate t-shirts asking Irish fans to choose which side of the Irish border their allegiance belonged; north or south?

only seeing this now. its about the dumbest idea i've ever seen. working on it. pic.twitter.com/3FiCA1gj8y

Kavanagh called the 'north-south' divide t-shirts the dumbest idea he had ever seen and less than two hours later and Reebok had terminated the design.

The coach used his influence to positively impact his society and he continues to do so today; announcing on Wednesday that SBG will be hosting free Brazilian Jiu-Jitsu self-defence classes for women every Saturday in the wake of the recent Jastine Valdez murder. 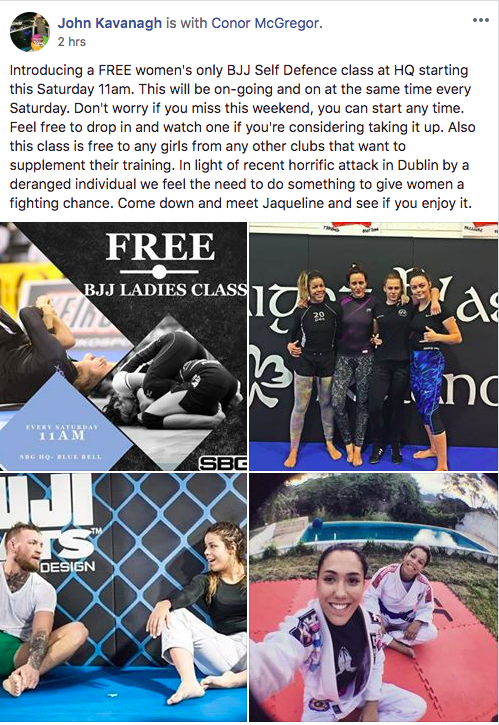 Kavanagh started training in MMA after he had tried to intervene in an attack on the street and 23 years later and he's now offering to train women for free to prevent them from being attacked on the street.

Whether he was walking by random attacks in Rathmines, checking future world champions for stepping out of line at his gym or simply 'doing the right thing because it's the right thing to do', Kavanagh has always seemingly had this ingrained sense of protection for those that need protecting.

Women need protection. The number of rapes reported to the gardaí jumped 28% last year to 655 rapes, an increase in 144 rapes when compared to 2016 figures.

In 2016, there were 16,946 disclosures of domestic violence against women noted during 19,115 contacts with Women's Aid Direct Services

Kavanagh can't do much to buck any of those trends but he can help women defend themselves and to teach them how to combat situations they will hopefully never have to face, yet increasingly must be aware of.

Kavanagh is smart but there's one thing in recognising a problem and there's another thing entirely in doing something to try and fix it.

When he was 18-years-old Kavanagh was almost killed for sticking up for the defenceless and now at 41-years-old he's trying to prevent similar misfortunes from happening to others by offering free self-defence classes.

It's a small gesture in the grand scheme of a big issue, but it's an offer that is noted, valued and  needed.

"Intelligence to me isn't just being book-smart or having a college degree; it's trusting your gut instincts, being intuitive, thinking outside the box, and sometimes just realising that things need to change and being smart enough to change it." - Tabatha Coffey

Things do need to change and smart people like Kavanagh can help accelerate a slow, withering process by giving others the tools to protect themselves decades after he was battered trying to protect others. Win or learn.


popular
Ireland team to play Wales: Andy Farrell's XV, the big calls and bold cuts
Jaden Sancho can't hide his smile as Old Trafford give heartwarming reception
Everton release brutal 59-word statement to confirm Anthony Gordon departure
"Every team did it!" - Paul O'Connell on Roy Keane comment to Ronan O'Gara that he couldn't deny
Owen Farrell praises Johnny Sexton in revealing interview ahead of Six Nations
Discontent over Netflix access for Six Nations documentary as Johnny Sexton focuses on his Last Dance
"It's crazy to think Bundee Aki might come straight in and start against Wales"
You may also like
1 month ago
Conor McGregor savagely hits back at Joe Rogan following PED comments
2 months ago
"There’s a new Irish superstar in town" - Young Derry fighter touted for UFC after big title win
3 months ago
Conor McGregor almost unrecognisable after shaving off iconic beard
3 months ago
Dana White confirms Conor McGregor is not in the USADA testing pool
4 months ago
Floyd Mayweather confirms he will fight Conor McGregor next year
4 months ago
Conor McGregor took exception to one part of Nate Diaz victory speech
Next Page