With a full month of no UFC events, mixed martial arts fans have had to venture further afield to get their fighting fix in recent weeks.

And those who stumbled upon this weekend's American Kombat Alliance show in Louisiana were treated to arguably the most hilarious post-fight speech of all time as the victorious Katherine Roy thanked opponent Brandi Narvaez for her sportsmanship (sportswomanship?) in the cage.

Roy had just been announced as the split decision winner in the first fight of the pro portion of the Rite of Passage card when she cut the promo of all promos live on FloCombat.

A touch of controversy at #RiteOfPassage with Brandi Narvaez vs. Katherine Roy. You be the judge. #WATCH 👉https://t.co/a7n7IrO4Bc pic.twitter.com/KdDWj3khu2

Roy had nothing but props for her opponent, who respectfully allowed Roy to avoid an embarrassing wardrobe malfunction against the fence.

"Brandi had me on the fence and she pushed my sports bra half the way up so we would have had some sideboob going on here.

Katherine Roy keeps it 💯 at #RiteOfPassage. Watch the full fight at the link below. 👇 pic.twitter.com/cY5E21pG1d 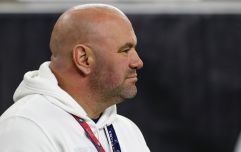 Dana White apologises after being caught slapping his wife on film

END_OF_DOCUMENT_TOKEN_TO_BE_REPLACED

"She goes 'Hold on. Bra! Boob!" and she let me fix my sports bra without hurting me, without punching me. That is good sportsmanship so none of y'all saw my titties. It did not happen.

"Alright? Give it up to this woman right here."

The dangers of a baggy rashguard, ladies and gents.