If you were on the Naas Road in the last day or so, you may have noticed a striking billboard depicting Jose Aldo's prone body.

The advertisement is the latest effort from Dublin's Hamptons Floor Store and has caused quite a bit of stir online.

The caption "you don't need a Brazilian to get laid" accompanies the picture of Aldo after he had been knocked out by Conor McGregor in the main event of last month's UFC 194.

It even reached the news feeds of some of the world's top MMA journalists.

On Wednesday afternoon, we spoke to the company who put out the advertisement and they defended their decision to use the image.

"We like to do advertising campaigns that get people talking," a representative of Hamptons said.

"It's not disrespectful, in my opinion. That's the sport that these guys are in. People get knocked out all the time and, the way that I see it, it's a celebration of Conor McGregor's victory.

"We're an Irish company and McGregor likes to go on about the 'fighting Irish' so we thought it would be fitting to use the campaign to celebrate the first time that a UFC title was won by an Irishman."

The argument against the campaign would be that Hamptons, who are no strangers to controversy after putting up the below billboard last year, are making light of a man being knocked unconscious but that's an assertion that they were quick to deny. 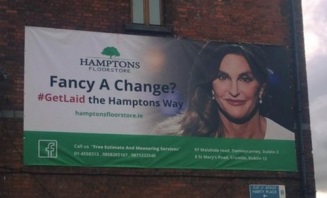 "It's not poking fun of Jose Aldo at all," continued the representative, who preferred not to be named.

"He was a great champion and he's been cleared to fight again so we're looking forward to seeing him back in the octagon.

"We've gotten flak from all over - from Lebanon, Brazil, the States - and we welcome people talking about us. If people are voicing their opinions then we enjoy that.

"Some of our campaigns are going to rub people up the wrong way but we're very conscious of where the line is and, as close as we've come to crossing it, I don't think we've done it yet.

"We'll just have to take the outrage on the chin!"