It is a claim that has been thrown around a lot in the past few days.

Following his dominant submission victory over Conor McGregor at UFC 229, and the mass brawl that followed, Khabib Nurmagomedov attempted to offer what he felt were valid reasons for his actions.

"He come to Brooklyn and he broke bus... You cannot talk about religion or nation. For me, this is very important."

END_OF_DOCUMENT_TOKEN_TO_BE_REPLACED

McGregor engaged in a barrage of trash-talk before the fight but of all the things he did say, there was very little about the Dagestani's religion mentioned. The only time 'The Notorious' stepped over the line was when he offered the devout Muslim, who certainly does not drink, some of his whiskey at the New York press conference, in late September.

Nurmagomedov declined the offer and McGregor replied by calling him 'a mad backwards c**t'.

The lightweight champion took most of McGregor's barbs in stoic fashion but meted out brutal justice in The Octagon. Seconds after he made McGregor tap out, he vaulted the cage and crash-landed on the Dubliner's SBG teammate Dillon Danis before blows were exchanged.

Danis did make a beckoning gesture to Nurmagomedov after the fight, as he was getting poked and prodded by the champion's Russian manager, but both he and John Kavanagh insist he did not shout anything amid the din. The New Jersey native claims he definitely did not mention Nurmagomedov's religion before chaos ensued. On Instagram, Danis wrote:

"Khabib Nurmagomedov's fans are attempting to smear me in an effort to justify his actions.

"I have never and would never denigrate anyone’s religion. I look forward to the results of the Nevada State Athletic Commission investigation which will reject this bullshit claim and put the blame where it belongs." 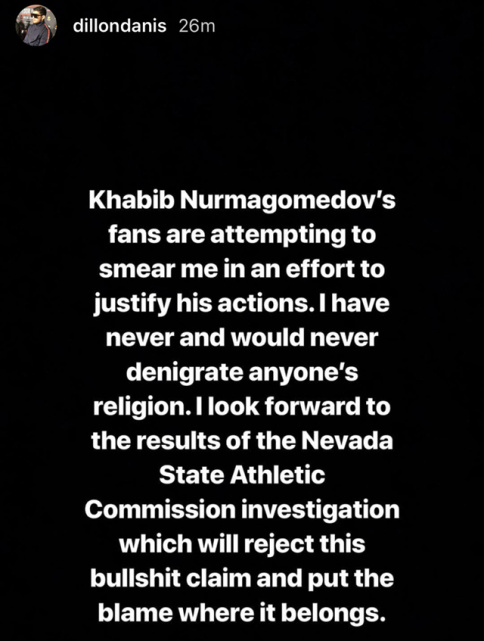 Both sides will never fully agree on what really sparked the meleé but few involved have come out clean.