"I hated seeing that dude going to his wife and her crying; pregnant. That sucks."

For Daniel Cormier, the moment Dustin Poirier was infused with belief that he could defeat Conor McGregor at UFC 257 was when he copped his first proper taste of 'The Celtic Cross'.

For years in his Cage Warriors and UFC career, McGregor's punching power ended many contests before they had a chance to get going. His 'death touch' left-hand cross accounted for the likes of Eddie Alvarez, José Aldo and, back in 2014, Dustin Poirier.

END_OF_DOCUMENT_TOKEN_TO_BE_REPLACED

Poirier lasted just over 90 seconds with McGregor at UFC 178, six and a half years ago, and he admitted he had been haunted by the loss for some time after. He re-doubled his training and preparations and prospered up in the lightweight division, defeating the likes of Alvarez, Anthony Pettis, JustinGaethje and (for an interim belt) Max Holloway.

Despite that, many wrote off the American's chances in his Fight Island rematch with McGregor. For his part, Cormier did not stretch to making predictions when he spoke with the media ahead of UFC 257, last week. On Poirier, he commented:

"That kid, man, that kid’s from Lafayette, Louisiana, and he is a dog and he’s gonna fight with all of his heart. He might not win all the time, but you watch Dustin fight, he’s a nasty son of a gun."

On Sunday morning, at the Etihad Arena, Poirier proved to be the nastiest active son of a gun in the lightweight division. He took McGregor down in the first round, punished his opponent with leg-kicks and finished him off with a flurry of second round punches. Poirier went into the bout as a massive underdog, but revelled in the role.

The shock Poirier victory elicited a loud, excitable reaction from Cormier, who was commentating for ESPN. The former heavyweight champion has now sought to defend that reaction. 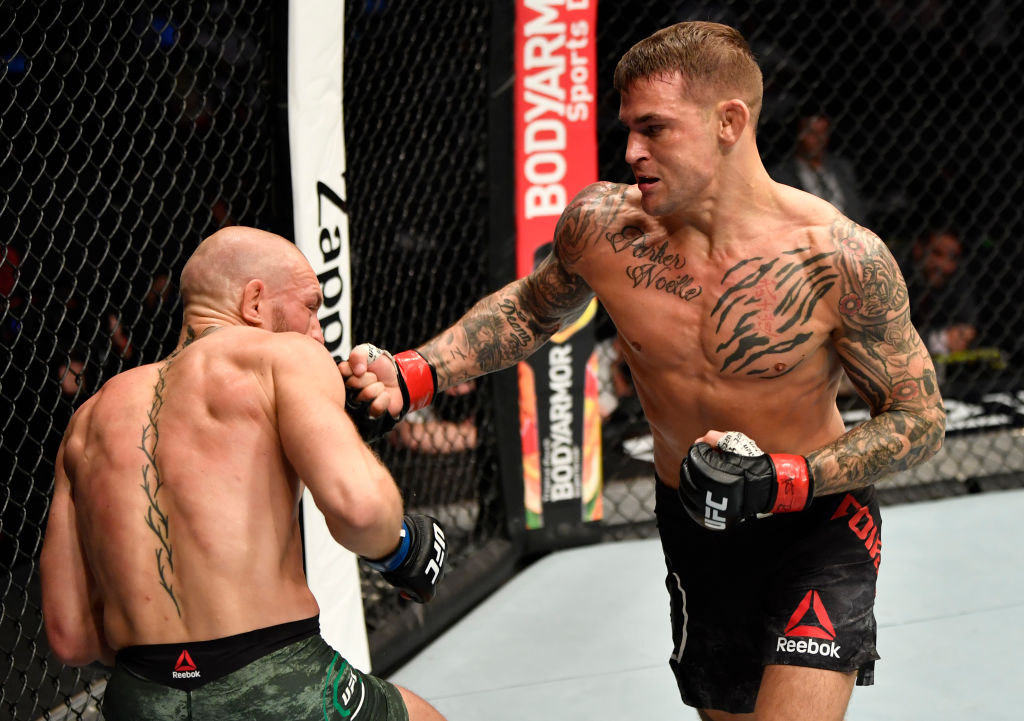 After paying credit to Poirier for his fighting masterclass, on the DC & Helwani show, Cormier defended his reaction. He also spoke about how tough it was to see McGregor's fiancée Dee Devlin, who is expecting the couple's third child in the summer, crying after the TKO finish.

"I wasn't counting Dustin out, because I got that at times. You can't win with people, because people are going to form their own opinions and it doesn't matter what you or I say or do. People are going to interpret it whatever way they want.

"Someone said that because I celebrated for Dustin, I hate Conor. I don't. Why? I don't find joy in a guy losing. I've lost. I hate it. I've seen my friends lose. You hate it.

"So you understand what's happening on the other side. For me, I love the sport but I hate the thrill and the agony. Because one side is so happy and the other side... I hated seeing that dude going to his wife and her crying; pregnant. That sucks."

END_OF_DOCUMENT_TOKEN_TO_BE_REPLACED

Cormier also spoke of Poirier telling him that he doesn't enjoy the fight game, after his victory. "I don't like this," Dustin told me, "But I'm a dog. I'm a dog when I'm in here."

The Louisianan told reporters after the bout that he did not enjoy anything around fight week apart from those moments when he was in The Octagon, competing with McGregor.


popular
Inbetweeners star sends All-Ireland semi-final message to Derry cult hero
"Jesus they never shut up, do they?" - What it was like training under Rory Gallagher and Jim McGuinness
Only die-hard rugby fans will get full marks in our Ireland vs. All Blacks quiz
Dublin edge Kerry in combined team as 'underdogs' get the nod on paper
"Sometimes a manager has to make those bold and tough calls." - Kerry's Paudie Clifford conundrum
Local press follow the All Blacks but miss out on Tadhg Furlong show
Your guide to a massive weekend of sport and how to stream it all
You may also like
4 weeks ago
Your guide to a great weekend of sport and how to stream it all
1 month ago
Conor McGregor says he knows his next UFC opponent and fight date
1 month ago
Commentating cage-side, Daniel Cormier missed the UFC knock-out of the year
1 month ago
Conor McGregor responds to Michael Chandler's callout after UFC 274
2 months ago
'All those guys are overpaid' - Dana White slams boxing salaries
2 months ago
Francis Ngannou wants a Tyson Fury clause in his new UFC contract
Next Page