Despite the popularity of the idea among fighters and fans, Dana White has never been a fan of bridging the gap between the organisation's current lightweight and welterweight divisions with a new weight class.

Many current lightweights struggle to make 155lbs but are too small to compete among the best of the best at 170lbs so the idea has been floated out there in recent years of building a new home for those athletes.

END_OF_DOCUMENT_TOKEN_TO_BE_REPLACED

But White, who was the first guest on Barstool Sports' new podcast My Mom’s Basement, assured the MMA community that there would be no 165lbs division in the UFC while he's at the helm.

"Not in the next seven years," White said when asked about the potential for a 165lbs division in the UFC. 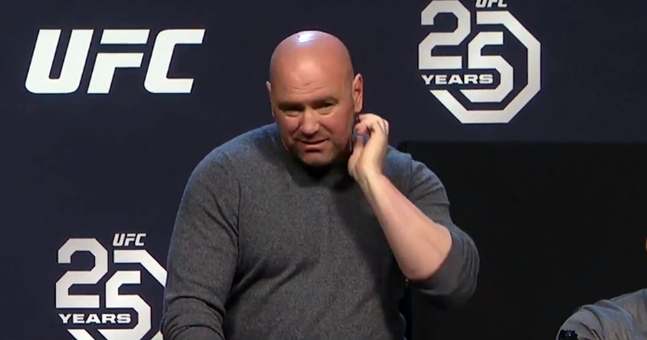 Fresh from the UFC's recent landmark broadcast deal with ESPN, White signed a new long-term contract extension with the promotion and he cannot see the sense in the argument that more weight divisions will result in more champion vs. champion bouts.

"If you look at our 170 and 155 division, they’re stacked. You’ve got Usman, Woodley, Covington, Wonderboy, RDA, Masvidal, Askren, Till, Ponzinibbio, Lawler, Edwards. That’s 170. Lightweights at 155 you got Khabib, Conor, Tony, Poirier, Iaquinta, Kevin Lee who’s moving over to welterweight to make it even better, Edson Barboza, Gaethje, Pettis now is over in the welterweight division which makes it even better, Cerrone, Felder, Gillespie, Diaz.

END_OF_DOCUMENT_TOKEN_TO_BE_REPLACED

One fighter who doesn't look like he will be fighting in any division again is Conor McGregor, who was a big proponent of the rumoured 165lbs division before his unexpected retirement announcement on Tuesday.

Hey guys quick announcement, I’ve decided to retire from the sport formally known as “Mixed Martial Art” today.
I wish all my old colleagues well going forward in competition.
I now join my former partners on this venture, already in retirement.
Proper Pina Coladas on me fellas!

Prior to his clash with Khabib Nurmagomedov at UFC 229, McGregor revealed that the "if there are two things that would keep me away from this game, it's the intense media obligations and the weight cuts."

END_OF_DOCUMENT_TOKEN_TO_BE_REPLACED

"Even 10lbs is [a lot]. Boxing is every bloody 3lbs or something, there's a new fucking division. There's definitely space for more divisions and something needs to be done so we can keep an eye on the way people are cutting weight and manage it and make the sport more enjoyable for the athletes who are actually competing.

"You'll get better fights for it. You’ll get fighters that are able to do extraordinary things when they’re going in full of energy and correctly prepared rather than killing themselves."