After the bitter defeat at UFC 196, Conor McGregor and John Kavanagh turned a corner.

When Nate Diaz sunk in that rear naked choke in the second round to force the tap, Team McGregor knew something needed to change. The Notorious had gassed, he had been out-struck over two rounds and he was finished -  all these things were firsts for his UFC career.

As John Kavanagh explained on the MMA Hour, the build up to that fight had been different to their previous camps. McGregor's stardom was continuing to climb, while Kavanagh had a life to live outside of the sport. They had drifted apart.

"I guess what did change a lot was our relationship. My life over the last couple of years has gotten a bit wild. I went from having a gym of about 80 people to having a gym with over 700 people and having a number training groups around the country that I visit regular (sic) and, you know, book coming out. Also hitting the stage of my life where I want to buy a house and do grown-up stuff, whereas 20s and 30s was just head down in sport."

"Conor's life has obviously gotten wild over the years and not that it was by design, but we kind of drifted a little bit. We realised that and we spoke about it after the contest and we made a pact to go back the way it was when we went to Sweden for the first time."

"It's actually funny now thinking back, when we went to Sweden, it was me and him on our own. We both went their on our own on the Tuesday and I was (there) the whole week with him doing the weight cut, being his sparring partner, doing manager work, doing the paper work, driving him around - I did all the roles."

"Now we have a team for each role, but let's not forget about where we came from - just me and him, and obviously our team Artem (Lobov) and Owen (Roddy) came in alter in the week. It is kind of funny thinking back that for that contest which kind of set the fire, it was just us and we back to bringing it back to that and me having a much more involved role in his training and setting the times and setting what the sessions were and just a real return to how we began." 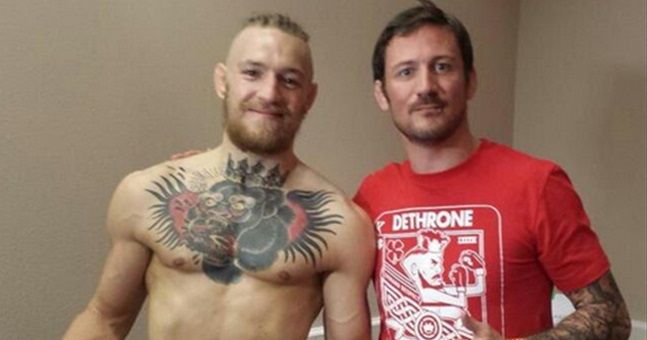 Kavanagh admits that this change in dynamic crept up on him. In the moment he didn't realise it was happening, but hindsight is always 20/20. It's only when looks back on it that he notices the warning signs.

"It's kind of like growing old. You don't notice it and then you meet someone who hasn't seen you in a while and they go, 'Oh, you've changed' or 'you've gained weight,' or 'you lost weight'. Now I see it. I didn't at the time, it was a very gradual separation, but when I look back now, compared to what we are now, I do see it. There were some times in the gym when I was walking out and he was walking in and I was kind of just nodding at him."

"It was just a very gradual process. We were training at different times. He'd come in at 10 or 11 pm and I had been training since 9 am. I was tired, like, 'I was here earlier, you weren't'." 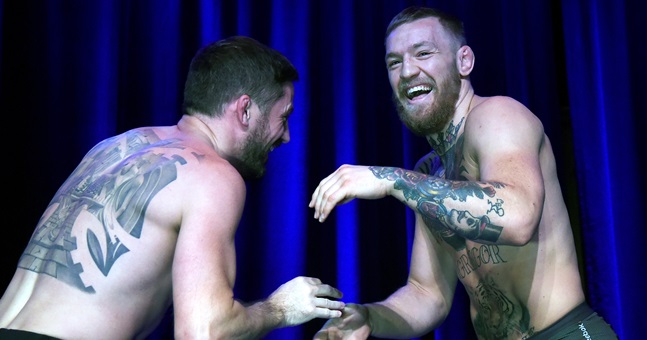 Unsurprisingly, McGregor has a penchant for doing his own thing and trusting his own feelings. When they're training schedules didn't align, Kavanagh didn't sweat over it, he thought McGregor might have been onto something.

"He's always been 'artistic' - I don't know if that's the right word. He went with the flow in his own time and sometimes that worked for him, sometimes that didn't. No tension, no bad feelings I was just like, 'Oh, I guess that's how he's doing it now. He's the champion of the world. He just beat some say the best ever in 13 seconds. What am I going to say? I guess this was just a new thing that just feels right for him in this moment."

However, with the Diaz loss came the epiphany, this new system that had gradually become the norm wasn't working and both fighter and coach made the decision to revert back to the old ways - back when they had gelled.

"I was thinking this could be a new thing. Maybe this could work for other guys as well, but after the contest I said, 'That doesn't seem to be working. I'm not going to repeat a process that doesn't work and expect a different outcome. We went back to schedule sessions, routine and look what happened after a short period."

"He brought it up. It was kind of like in a club the night after the fight and you have a couple of whiskeys and you say, 'What happened? Let's look back over those few months. What did we do different." When you have a loss it's important you learn from it. It's important to analyse what we did different from the Aldo contest, the Mendes contest, the Brimage contest and that was a big one - a glaring factor was not so much personal contact."


popular
"I never really cried or got emotional over what I've done as an individual. I couldn't give a s***"
"If I break my wrist, it's on f***ing both of you." - Koepka and Berger act the spoiled child
"I was off the grid" - Aidan O'Shea respond's to Mayo criticism after club championship win
The FootballJOE Pub Quiz: Week 7
Dessie Farrell needs to make Paul Mannion return a top priority
Garry Ringrose raves about four young Leinster stars to watch this season
'I won The Open by six shots in my home country, but this was the best week of my golfing career'
You may also like
1 month ago
What are the dark circles on swimmers backs at Tokyo Olympics?
2 months ago
Conor McGregor deletes series of tweets aimed at Poirier and Khabib
2 months ago
Conor McGregor says he was injured going into Dustin Poirier fight
2 months ago
Conor McGregor labelled an 'easy payday' who can't compete with top UFC fighters anymore
2 months ago
Khabib says McGregor is "finished" as Dos Anjos makes his play
2 months ago
Shocking post-fight footage shows McGregor threat that upset Poirier so much
Next Page