The former marine has worked with some of the top UFC stars over the past few years and has gained renown for getting them in top fighting shape.

Lockhart has worked closely with Dustin Poirier and Justina 'Cris' Cyborg in recent years and he was Conor McGregor's diet guru for his UFC 202 and 205 bouts. 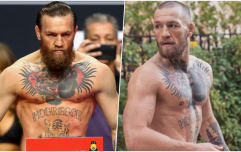 END_OF_DOCUMENT_TOKEN_TO_BE_REPLACED

For the festive season that is in it, Lockhart offers up a fantastic tip to all those people that want to keep the muscle while shifting that stubborn gut/belly.

In response to a query from a "skinny fat" fight fan, Lockhart said:

"A lot of people call it spot reducing. Unfortunately, everybody has fat cells and a different amount of fat cells.

He added, "There are often increased amounts of cortisol [a stress hormone] found in certain individuals. It has been sown to increase the amount of belly fat in some people. If this is something you can address, then that is one solution.

"Some things that increase that inflammation [of cortisol] are things that we eat. One if those things is Omega 6. Your body needs this and it is an essential fatty acid, meaning my body can't produce it on its own. I have to produce it, meaning I have to intake it through food or supplementation.

"To get rid of that inflammation, you have to take in an equal amount of Omega 3. You've got to clean that system out."

So, Omega 3. The best source of this is seafood, namely fish.

Mackerel and salmon are best but you can also take flaxseeds, walnuts, cod liver oil and sardines.

Not very festive but it should help in reducing the size of your belly.


popular
Ballyhale's Colin Fennelly felt Ballygunner's victory speech was disrespectful
Eniola Aluko responds to criticism after on-air mistake on ITV
Brazil star responds after Roy Keane slates dancing celebrations
Roy Keane reacts to Brazil's jubilant celebrations in first half demolition job
Rory McIlroy explains 'falling out' with Shane Lowry that lasted a few years
Samuel Eto'o involved in an ugly confrontation with fan outside World Cup match
World Cup 2022 Day 16: All the major action and talking points
You may also like
5 months ago
"They look really well conditioned" - Finian Hanley praises Armagh's fitness levels under Kieran McGeeney
9 months ago
England star George Furbank on biggest gym demon in the current squad
10 months ago
How The Occlusion Cuff can help build strength, endurance and recovery from injuries at a faster rate
10 months ago
How to get your gym work, nutrition and mindset right for the GAA pre-season with Brian Keane
11 months ago
Here's where you can find some incredible deals on exercise machines in 2022
1 year ago
Aidan O'Shea on gym work, training over lockdown and the importance of younger players bulking up
Next Page