Conor McGregor vs Eddie Alvarez: What time is UFC 205 on at and where to watch it

It's the most anticipated MMA event of the year and Ireland's Conor McGregor is the main attraction of UFC 205.

Conor McGregor will be hoping to add another belt to his resume as he takes on undisputed lightweight champion Eddie Alvarez in a champion vs champion superfight main event at UFC 205.

The Notorious enters this fight off the back of two PPV smash-hit headliners against Nate Diaz. He succesfully sought retribution against the Stockton native for his submission loss at UFC 196 by grinding out a closely-fought majority decision at UFC 202.

END_OF_DOCUMENT_TOKEN_TO_BE_REPLACED

Alvarez secured his Red Panty Night with three straight wins in the UFC. He defeated former Strikeforce champion Gilbert Melendez and former WEC and UFC lightweight champion Anthony Pettis to earn a crack at Rafael dos Anjos in July. He knocked out the Brazilian in the first round to claim the belt.

The headline act is just one of three title fights on the card with Tyron Woodley defending his belt against Stephen "Wonderboy" Thompson in the co-main and an all-Polish women's strawweight title fight between champion Joanna Jedrzejczyk and top contender Karolina Kowalkiewicz in the preceding bout.

END_OF_DOCUMENT_TOKEN_TO_BE_REPLACED

The card is stacked from top to bottom with fan favourites Frankie Edgar, Donald Cerrone, Miesha Tate, Chris Weidman and Khabib Nurmagomedov (to name but a few) all featuring.

If you're still skeptical, just take a look at the preliminary card. It's good enough to be a main card of another numbered event. (update: Rashad Evans vs Tim Kennedy has been scrapped from the card) 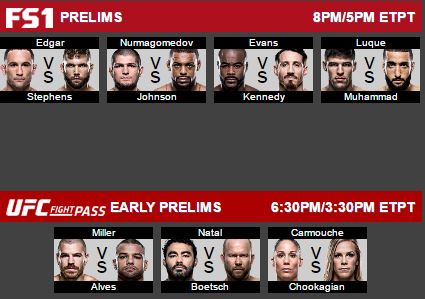 END_OF_DOCUMENT_TOKEN_TO_BE_REPLACED

UFC 205 takes place at New York's Madison Square Garden on Saturday November 12, 2016, with the main card beginning at 3am on Sunday morning (Irish time). The preliminary card is due to kick off 1 am, while the early prelims begin at 11:30 pm Saturday.

If McGregor beats Alvarez he will become the first fighter to hold two belts in two separate divisions in the UFC simultaneously. He will also join an elite group of fighters to hold two titles in the world's largest MMA promotion which so far only includes Hall of Famers Randy Couture and BJ Penn.

This will be only the second event in UFC history where belt holders of separate divisions will compete for a title. The first time was at UFC 94 in 2009, where then-170lb champion Georges St-Pierre succesfully defended his belt against then-lightweight king BJ Penn.

However, McGregor's reign as dual champion won't last long as Dana White has already confirmed he will be forced to relinquish one of his titles if he is victorious.

UFC 205 will also mark the promotion's first ever event in New York city. Professional MMA had been outlawed in the state from 1997 until April 2016 when Governor Andrew Cuomo finally put pen to paper to legalise MMA in the state. It is estimated that the UFC spent more than $2 million lobbying New York legislators in the eight years prior to the sport finally being legalised in the state.

Everyone is looking for a shot at Conor McGregor at the #UFC205 presser! https://t.co/sHjYqD5xbH

The only venue to watch the event in Ireland will be on BT Sport 2 which can only be accessed through an Eir sport pack or through Sky TV Ireland. Virgin have dropped the BT Sport package leaving their customers without any live UFC coverage.

BT Sport 2 will be showing all the action from the preliminary card (1 am Irish time) onwards. They will also be broadcasting the post-fight show at 7 am.

UFC Fight Pass subscribers will be able to stream the early Fight Pass and the preliminary card live through the onlie service, and they can catch the entire card 48 hours after the main event concludes.

The Green Isle Conference and Leisure Hotel, Naas Rd, Dublin will be livestreaming the event with doors opening at 11 pm on Saturday. It's a strictly over 18's event. Tickets cost €20 (€50 VIP) and you can buy them here.

The Living Room on Cathal Brugha street are showing the full card from 11 pm on Saturday at a ticketed event. Entry for the event is through Murrays bar. Tickets on sale at the door for €20 with last entrance at 3 am.

Sin Nightclub on Sycamore Street, D2 will also be livestreaming the card. Tickets cost €15 for the over 20's event. Doors open at 10:30 pm with last entry at 1 am.

If you know of any other viewing parties around the country, don't hesitate to send the information to editorial@sportsjoe.ie or hit us up on Facebook and Twitter


popular
World Cup 2022 Day 10: All the major action and talking points
Iran demand action by FIFA after USA team change flag on social media
Thibaut Courtois warns teammates after leaks emerge from Belgium camp
"I can absolutely say that I have never enjoyed a job more" - McKaigue revelling in new role as Slaughtneil GPO
Roy Keane's issue with Argentina star could rival Graeme Souness and Paul Pogba
World Cup protester releases defiant statement after pitch invasion
World Cup 2022 Day Nine: All the major action and talking points
You may also like
2 months ago
Hasbulla signs five year deal with UFC 'worth more than many fighters'
2 months ago
UFC fighter Elias Theodorou has died, aged just 34
2 months ago
John Kavanagh and Johnny Walker kicked out of T-Mobile Arena during UFC 279 main card
2 months ago
Conor McGregor took exception to one part of Nate Diaz victory speech
2 months ago
Nate Diaz and Tony Ferguson tossed together for UFC 279 main event after wild 24 hours
3 months ago
Your guide to a huge weekend of sport and how to watch it all
Next Page